Golf: Shubhankar Sharma ready to take on the world

He is eager to follow in the trail of close friends Anirban Lahiri and Arjun Atwal. 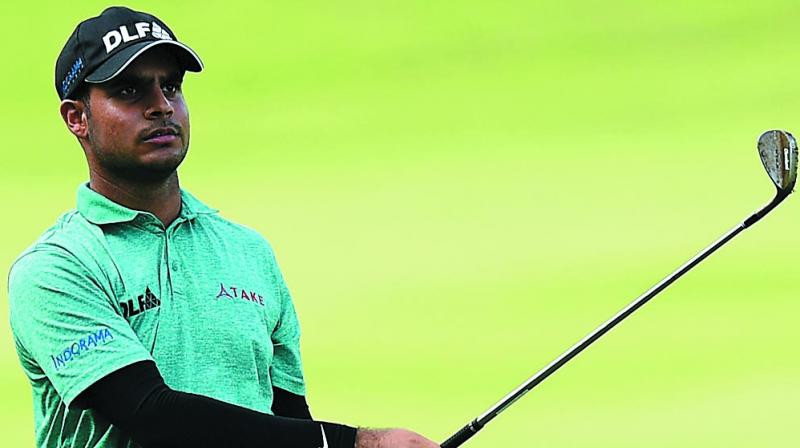 Shubhankar Sharma is all set for his maiden World Golf Championships-Mexico Championship appearance next month and the rising Indian star intends to keep his career trending upwards with hopes of reaching the ultimate destination, the PGA Tour, very soon.

His stunning rise, which has been predicted by some of India’s leading golfers, was capped by a brilliant final round of 10-under 62 in Kuala Lumpur which shot him to the top of the Race to Dubai rankings and Habitat for Humanity standings on both Tours respectively.

“I’m really excited as it was a goal of mine to get into one WGC event this year. I knew I had to be in top-10 in Europe to get it done. I’m really happy how things have changed for me. I can’t wait to play against the world’s best in Mexico,” said Sharma.

He is eager to follow in the trail of close friends Anirban Lahiri and Arjun Atwal. The former is a two-time Presidents Cup star and a regular on the PGA Tour while latter is India’s first winner on the world’s premier circuit.

“The goal is to win the bigger tournaments and to play on the higher tours.

“That’s what I’m looking at and I’m very focused about it. Playing on the PGA Tour has always been my dream. It wasn’t long ago that I would watch PGA Tour Live with my friends, spending some late nights watching the World Golf Championships and the big events in America,” he said.

Sharma ended last season at no. 202 in the Official World Golf Ranking but success in Malaysia has pushed him up to 72nd, making him the highest ranked Indian currently on the planet.

Now that he’s in the WGC-Mexico Championship from March 1 to 4, the young man also hopes to qualify for the WGC-Dell Technologies Match Play in Austin later in March which the top-64 golfers in the world as of March 12 will be exempt.

Then, the next goal will be to break into the top-50 which can potentially reward him with invites to the Masters Tournament in April and The Players Championship, which is the PGA Tour’s flagship tournament, in May.

“Things are moving too fast for me, and I am just trying to stay confident and keep playing well. I received a call from Anirban after Malaysia and he’s encouraging me to keep going as I could get into some really big events. It’s still some way to go but I’ll try to ride on the momentum,” he said.

Golf fans beyond Asia would not have heard of Sharma’s name until his most recent success. As a kid, he was encouraged to learn the game through the influence of Lahiri’s father, who served in the Indian Army alongside his father, Col. Mohan Sharma.

After developing into a leading amateur where he won the all-India amateur title at the age of 16, Sharma turned professional.

“My dad is a great visionary and he saw my potential. I wasn’t convinced of turning pro at that age and others told me to wait as well.

“Then one day, dad sat me down for one hour and said we have to get to somewhere in life. It was my dad’s decision which I followed his advice. Everything’s fallen into place thanks to him,” said Sharma.

Many of his peers have marveled at how Sharma thrives under pressure and keeps a level head which he attributed to meditation taught by his mother, Neena. “It really helps when I am in a tough spot, especially when I am not playing well. I try to control my breathing and stay in the moment as much as possible,” he explained.

“We’re a religious family and mum taught us to meditate by sitting down cross legged, doing some breathing exercises and just trying to clear your mind. It’s been a routine of ours since we were kids.”

He plans to stick to his winning recipe, which includes working continuously with long-time swing coach Jesse Grewal and Gurbaaz Maan, who tends to his club-fitting needs. And of course, his parents and younger sister are always providing the morale support.

“Golf is a process. You put in the hard work and there is a time that everything bears fruit. You have to wait for the right moment. I won’t say I’m surprised (with the wins). When I turned pro, I always thought of achieving a certain level and knew there would be a day I would break into the world’s top 100.

“Every golfer dreams of becoming the world no. 1 and that motivates me as well. Going to the golf course and getting into the big events, you keep setting new standards. I’m sure Dustin (Johnson) isn’t content at being world no. 1 and he wants to win more majors. I want to be world no. 1 too one day, win the World Golf Championships events, win the majors and play on the PGA Tour. Getting a chance to play at that level will be incredible.”