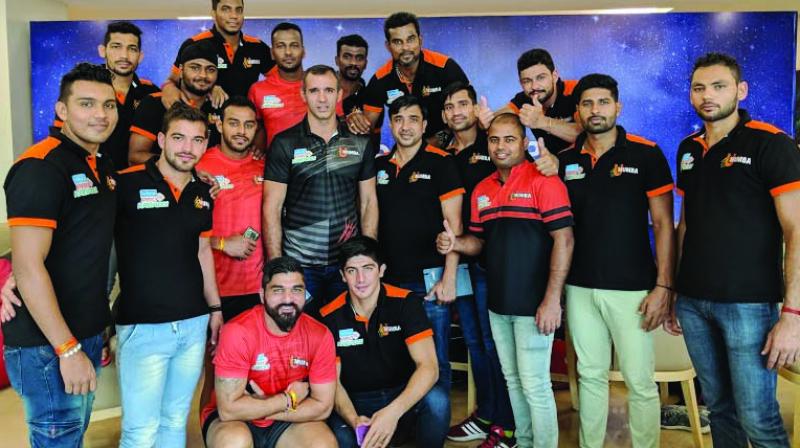 U Mumba team pose with their coach Gholamreza Mazandarani(Center) after a training session.

Puneri Paltan made a thrilling comeback to hold former ProKabaddi League champions U Mumba to tie 32-32 in their enthralling opening match against Puneri Paltan in Chennai on Sunday.

In last minute drama, Nitin Tomar pulled it back for the Pune side who seemed to be staring defeat at 30-32 but ended the match on level terms just in time. Nitin inspired comeback by scoring 14 points identical to U Mumba’s Siddharth Desai who set up things for Fazel Atrachali captained side.

The first half saw an evenly balanced game with Nitin Tomar leading the way for Puneri Paltan, scoring nine raid points and Siddharth Desai delivering the goods for U Mumba with nine raid points of his own.

Midway through the game, the match was evenly poised, however, Fazel and Dharmaraj Cheralathan earned U Mumba their first and only all-out of the match.

Nitin continued to score in raids to keep the contest close for his side. While Fazel and Dharmaraj proved their value to the Mumbai-based franchise, scoring 8 tackle points amongst each other.

With 16 minutes left in the second half, Siddharth scored the first Super Raid of his League career, enabling U Mumba to take a four-point lead and close in on an all-out.

Nitin, though, had other ideas, managing three straight successful raids to cut U Mumba’s lead to just two points. Dharmaraj’s brilliant tackle on Nitin with a minute left took U Mumba’s lead to
32-30 and seemed to have sealed a derby win for his side.

But there was still drama left in this game as Monu Goyat got Fazel to leave the Paltan trailing by just one point before captain Girish Ernak soured Siddharth’s brilliant debut by tackling him on U Mumba’s last raid of the match and earning a well-fought draw for his team.

U Mumba who are coached by Iran’s Gholamreza Mazandarani will take on Jaipur Pink Panthers on Wednesday in Zone A clash. While there are no players from Mumbai in the squad, two players from Maharashtra, defender Adinath Gavali and raider Siddharth Desai will have special roles to play in the coach’s game plan.

“We are always looking at the talent base from Mumbai to come through. The past few years has seen the rise of players from Mumbai and Maharashtra. But more needs to be done,” said Co- Founder and CEO U Mumba, Supratik Sen.