U Mumba are fourth in Zone A with 55 points rom 20 matches. Jaipur Pink Panthers are fifth with 50 points from 17 matches. 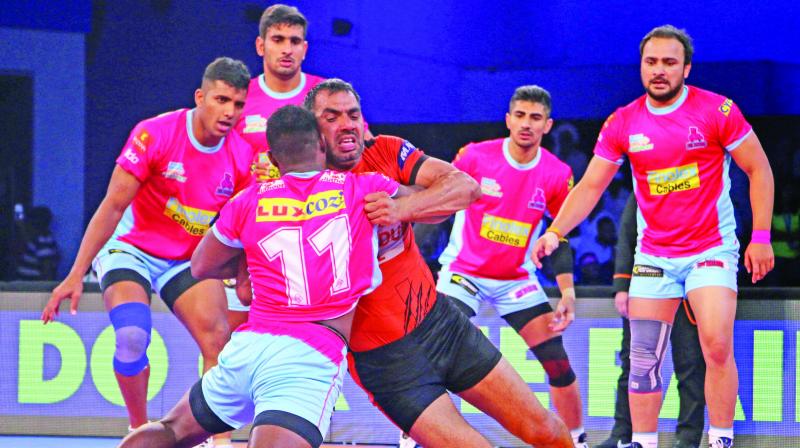 U Mumba's hopes of qualifying for the super playoffs are now in jeopardy after they lost to the Abhishek Bachchan-owned Pro Kabaddi franchise Jaipur Pink Panthers 32-36 on Saturday night.

Jasvir Singh (9) and Manjeet Chhillar (6) combined to score 15 points for Panthers. Kashiling Adake scored seven points for U Mumba whereas Anup Kumar chipped in with six.

U Mumba are fourth in Zone A with 55 points rom 20 matches. Jaipur Pink Panthers are fifth with 50 points from 17 matches.

Jaipur Pink Panthers then launched a comeback as they scored five points without conceding any to trail 15-16 at the end of the first half.

Jaipur began the second half strongly as they inflicted an all out in the 22nd minute to lead 20-16. U Mumba were struggling to get points on board as in the first seven minutes of the second half Jaipur scored 12 points compared to

U Mumba’s four. Jaipur inflicted another all out in the next minute to lead 31-21.

With less than five minutes to go, Jaipur Pink Panthers held a nine point lead as they were ahead 34-25. U Mumba tried to make a comeback, but fell short.