Samrat Yadav for team Maruti Suzuki ensured that they finished in the third position. He had clocked a cumulative time of 7:21:10 minutes. 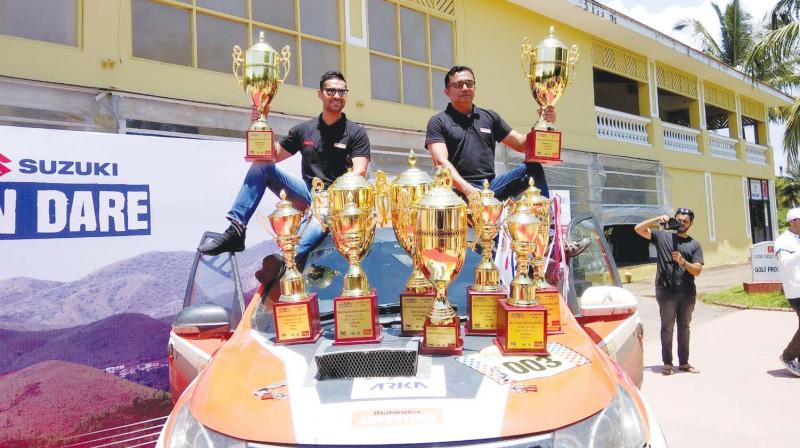 Gaurav Gill (left) celebrates after his victory on Saturday.

The final day of the rally was the longest in terms of distance, with the stages being held on a distance of 71 kilometres at Kolhapur, Maharashtra.

With Gill holding the lead at the end of the first stage, the second stage was cancelled due to bad weather conditions.

Over the course of five days, Gill clocked a cumulative time of 6:57:44 minutes with Phillipos Mathai coming second at a time of 7:12:00 minutes.

In the process team Mahindra Adventure picked up the top two spots.

Entering the competition after a six year hiatus, Gill along with Musa Sheriff notched up their 31st victory together out of the 50 rallies they had participated, a unique Indian record.

“Even after all these years, I retain the same enthusiasm for rallying. I am motivated enough to give 200 percent when I drive,” Gill said while accepting the championship trophy. Gill concluded by saying that he would return for the next edition too.

Samrat Yadav for team Maruti Suzuki ensured that they finished in the third position. He had clocked a cumulative time of 7:21:10 minutes.

In the bikers’ category it was Vishwas SD who took home the title with Vinay Prasad coming in the second position and Yuva Kumar coming in the third.