The Pune based PKL franchise moves to Ahmedabad after a successful Patna leg. 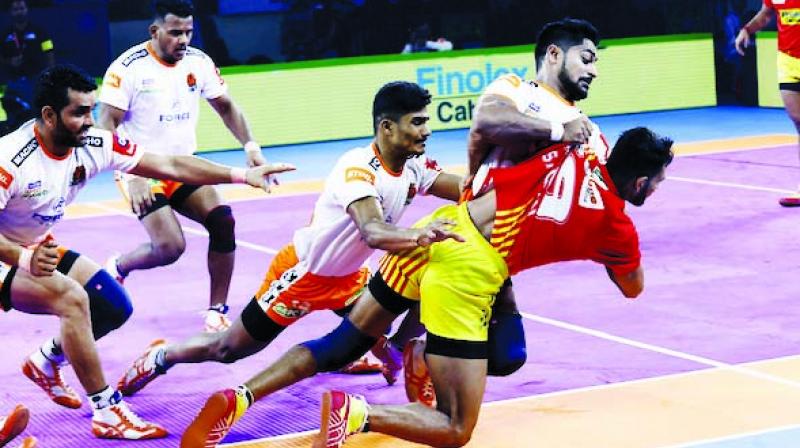 Puneri Paltan, under new coach Anup Kumar, had a disastrous start to season 7 of Pro Kabaddi League, losing their opening game to Haryana Steelers in Hyderabad. It was followed by Maharashtra derby, where they lost to U Mumba and later to Bengal Warriors. Both these crushing losses came in Mumbai.

But the Pune franchise turned their sinking campaign with back-to-back wins in Patna against much-fancied Patna Pirates and Gujarat Fortunegiants.

Pune’s underperforming defence came to fore to play a big role in their team’s win. Kalyan based Girish Maruti Ernak led the defence in both games by scoring four tackle points against Pirates and High 5 against Fortunegiants.

“We lost the first three and were determined to do better in this leg. We’ve worked extremely hard over the past week and we wanted to make sure we play as a team on the mat. I’m happy that we’ve done just that in the past two games,” Ernak told reporters after the game against Gujarat Fortunegiants.

“I took lessons from the first three games, worked on them, and the result is evident,” he added about scoring High 5 in the last game.

Incidentally, it was just the second ever victory for Paltan over Pirates and they managed their first ever win over Fortunegiants. Those big wins have lifted the team’s morale as they take on Dabang Delhi in the Ahmedabad leg on Saturday. Raiders like Manjeet have complemented well their defenders in the last two games. Anup who had to wait till the third leg pf this PKL for his first ever win as coach, always believed in his team’s capability.

“It’s been great so far. We’ve won against two outstanding teams. My players have shown what they are capable of and it is important for us to continue in the same rhythm,” he said.

He admitted in the post match press conference that he had found the winning combination but considering the long league, he is aware that changes are necessary. “The combination we believe is the winning one in the camp may not be the one that actually does well during the season. So, we have to be flexible and make those adjustments to win. We’ve been brilliant over the past two games and everything has worked, so I do feel that this combination is a good one,” Anup added.