‘Don’t expect much from paddlers’

The ITTF Star Coach of the Year Massimo advised players to plan wisely in picking the tournaments ahead of the Olympics. 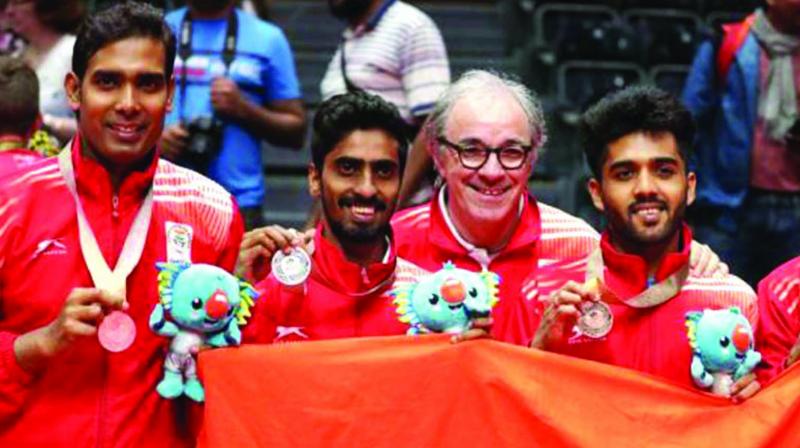 With less than a year to go for the 2020 Olympics, former table tennis coach Massimo Costantini showed his concern about the Indian players’ chances at the quadrennial event as they are still waiting for the new coach, Dejan Papic, to arrive. Constantini, under whose regime the Indian team touched new heights at the 2018 Asian Games and the Commonwealth Games, left his job a year ago citing personal reasons but he keenly follows the team’s activity.

“If I were the coach, I would advise them to keep their expectations low, like I did in the Asian Games — and those results were fantastic. You have to be ready and go for it. You never know something magical might happen,” said Costantini, who was in the capital on a three-day visit after his resignation as the national coach a year ago.”

The former India coach expressed his thoughts for the team and said that nothing has much changed from the past but lack of guidance is a major problem for the team. At the same time, he also praised players for maintaining a good run even without a coach.

“I try to follow the Indian players through news, the ITTF website, etc., which unfortunately doesn’t give a clear and proper picture. I don’t think much has changed though. Surely lack of guidance is a major problem. A proper planning, support and guidance are very important for the players.

“I admire players that they are performing so well despite of all this. Players like Manika (Batra) and G. Sathiyan are doing very well. They have managed this period in a highly planned and mature way”, the 61-year-old said, who is now the ITTF’s high performance manager.

The ITTF Star Coach of the Year Massimo advised players to plan wisely in picking the tournaments ahead of the Olympics. He also emphasised on the importance of the fitness ahead of the big event.

The ITTF Star Coach of the Year said, “The players need to combine the quantity of competitions and performance really well. The Olympics is always very special. I think you have to analyse your every opponent and balance all tournaments well. Try to get proper appetite and miss tournaments if need be. They need to plan fitness and training well and strike the perfect balance,” he said.

He further added, “Sathiyan has a fantastic chance of qualifying for the Olympics. He can be a big threat for many players. I feel Olympics is easier as compared to the Professional Tour as there are lesser number of Chinese, Japanese and Korean players.”

Costantini was all praise for the ongoing Ultimate Table Tennis and feels that leagues like UTT are a great way for the players to enhance their skills.

“Leagues like UTT let players play freely without worrying about the professional tour points. It works as a training event for Professional Tours. It is a great opportunity for the players to enhance their skills and also get a great amount of exposure.

“Having leagues such as UTT in a country like India is a special thing as Indian Paddlers get to play with International players and highly experienced coaches,” he added.