Geeta Chauhan, a national-level and international wheelchair basketball player from Andheri, opens up about her struggles and journey to the top. 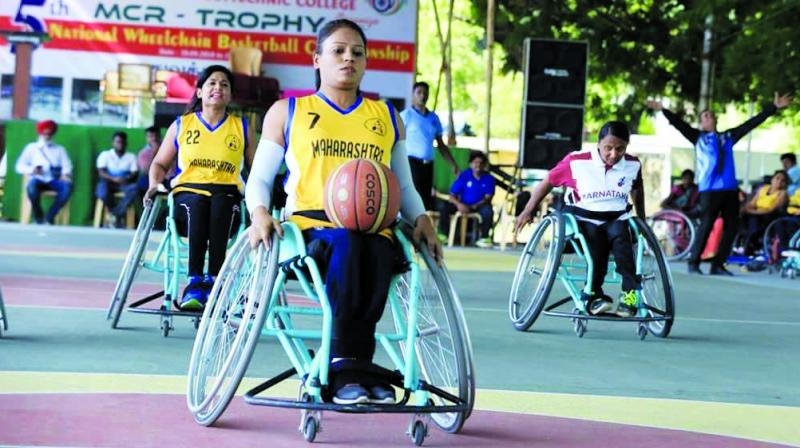 Though apprehensive about whether she could play the sport, Geeta’s friend persuaded her, marking the onset of her athletic journey.

Crippled by polio at the age of six, Andheri resident Geeta Chauhan’s life was a path laden with thorns. But defying each obstacle, the 28-year-old went on to become a national-level wheelchair basketball champion and lawn tennis player and is soon to be a wheelchair wrestler.

Recently, the state wheelchair basketball team, of which Geeta is a member, bagged the gold medal at the 6th National Wheelchair Basketball Championship in Punjab.

The seeds of Geeta’s dominance in the world of sports  was sown in 2017 when a friend who suffered a spinal cord injury informed her about the formation of a wheelchair basketball team in the city. Though apprehensive about whether she could play the sport, Geeta’s friend persuaded her, marking the onset of her athletic journey.

“When the team was formed we didn’t have a ground or any financial support. A hospital for the handicapped behind Haji Ali, however, offered their ground  to us to practise, which was in a bad condition. We played only on Saturdays and Sundays. I didn’t even have a sports wheelchair at the time and practised sitting on a normal chair, doing whatever I could,” recalls the athlete.

Belonging to a middle class, conservative family, Geeta attended school, went to work and underwent training much to her father’s resentment but with the support of her mother and sisters.

Soon, the team was offered the ground in Don Bosco School in Borivali, but the expensive sports wheelchair still eluded Geeta. Neverth-eless, she diligently worked towards her goal to perform in the nationals.

“In 2017, I performed in the fifth national level wheelchair basketball championship held in Coimbatore. I had the top score in the championship and won a gold,” smiles Geeta. And it was this championship that ultimately paved the way for her international game in Bangkok a year later.

“My performance at the nationals got me selected for the international championship camp held in Chennai, which acts as the grounds for international selection. From there I played at the Asian Para Game Wheelchair Basketball in 2018,” she says.

It  was only last year when Geeta got her sports wheelchair and is the fastest player across the department in India. She has also ventured into lawn tennis and aims to take part in the Paralympic Games.

“For that, I need my singles game to be stronger than ever since the group is not easy for us. I played the first nationals too this year. But during my finals I lost my father. I emerged the runner-up in the finals, won a medal and trophy,” shares the sportsperson.

Putting her strength of speed to good use, Geeta now wants to venture into wheelchair wrest-ling. “If I do that, the speed that I will  gain would help me in basketball,” she adds.

For someone who found a new life through sports, Geeta practises four to five days a week and in whatever time she can dedicate to her sport. “Since I have come into sports, life has been different. The moment I picked up the ball I could see myself doing great things in  the future,” she states.

But right before she got into sports, Geeta struggled to finance her education and was  forced to go on a job hunt, where she faced her fair share of rejection. “Once, I gave 28 interviews in a month and was rejected by everyone. But then a friend called me to work for his telemarketing company, which ope-ned various opportunities,” rec-alls Geeta who went on to work at the telemarketing depar-tments of ICICI and Reliance Money. Now running a garment business, the athlete’s supporting herself financially.