Sharma had a good run of four birdies on his back nine that helped him recover after he had gone five over on his front nine. 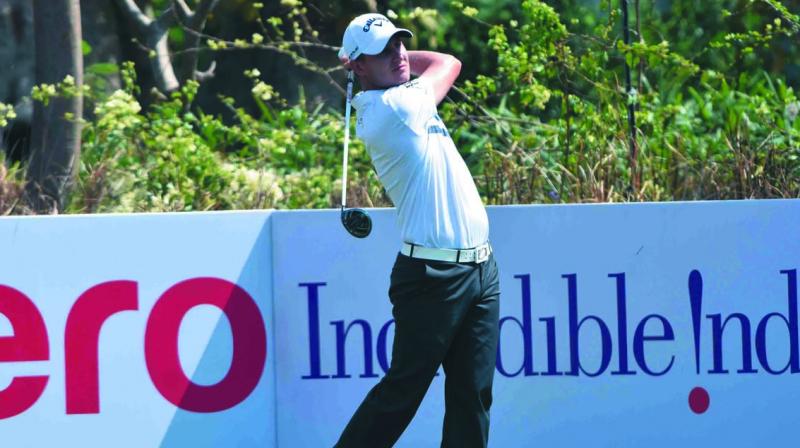 Argentina’s Emiliano Grillo in action on day one of the Hero Indian Open.

Gurgaon: The Black Knight course bared its fangs early on into the Hero 54th Indian Open at the DLF Golf and CC here on Thursday, not only in terms of scoring numbers, but also time.

Argentine Emiliano Grillo turned in a blistering, record-equalling seven under card of 65 for the clubhouse lead, but it was the course’s length — and long minutes spent on the greens and adjudications — that made sure a sizeable bunch did not even complete round one, 24 of the 144-strong field forced to pack up as darkness started to fall.

Bunched together two shots behind the 2016 PGA Tour rookie of the year were Spaniard Pablo Larrazabal, who had to beat the clock to even get to the venue, Frenchman Aiden Saddier, Matteo Manassero of Italy, South African Keith Horne and Paul Peterson of the USA.

Ajeetesh Sandhu was the closest Indian to the top of the leaderboard, in tied seventh on four under par 68 alongside Scotsman Marc Warren. The Chandigarh golfer, who scored his maiden Asian Tour title in Taipei last year, had five birdies and a bogey against his name, while Udayan Mane (after 16 holes) and amateur Kshitij Kaul (after 17) were two under par 70, just ahead of Arjun Atwal (71).

Said Shubhankar, “I didn’t start the event the way I would’ve liked to.

“You can’t make mistakes here as it’s a penalising course. Playing here is a tough test of one’s ability, and one has to be on top of his game to do well. There’s a lot to learn from today’s round.”

Sharma had a good run of four birdies on his back nine that helped him recover after he had gone five over on his front nine.

Added Grillo, “I almost had to play perfect golf out there. It’s a very difficult golf course. I’m very happy with the way I handled myself out there. It was very tough and I was able to make some good putts and hit the fairways when I needed to.

“I had, I think, 26 putts and that helps anyone’s round out there. Hopefully I can keep rolling them in. I’ve just got to keep the ball in play, that’s what matters around here.”