Hockey: Juniors look to step up 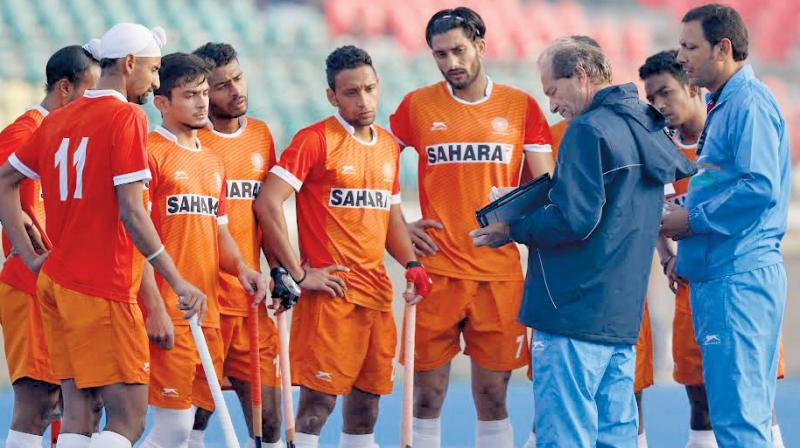 Coaches Roelant Oltmans (second from right) and Harendra Singh (right) give instructions to the junior team in Lucknow on Wednesday, ahead of their opening clash against Canada.

Lucknow: A formidable Indian team will aim to end their title drought spanning over a decade and a half when they take on minnows Canada in their opening group league fixture in the 11th FIH Junior Hockey World Cup, beginning Thursday.

The last time India won the Junior World Cup was in 2001 at Hobart, Australia. It was a side that boasted of quality players like Gagan Ajit Singh, Deepak Thakur, Jugraj Singh, Prabhjot Singh, all of whom went on to represent the senior national team with distinction.

This is the second time that India are hosting the men’s Junior World Cup in hockey, and also the second successive time it is being held in India.

A total of 16 teams have been put into four groups of four teams each. India are placed in Pool D along with Canada, England and South Africa.

Should the home team finish in the top two of the group stages, which they are expected to, they will have to face one of the top two teams from Pool C, which comprises defending champions Germany, New Zealand and Spain.

Besides the title triumph in 2001, India’s other notable result in the Junior World Cup is a runners-up finish in the 1997 edition at Milton Keynes, United Kingdom.

This time around, India are fielding one of the strongest teams in the event which features internationals like captain Harjeet Singh, striker Mandeep Singh, defender and drag-flicker Harmanpreet Singh and goalkeeper Vikas Dahiya.

The Harendra Singh-coached side is also approaching the World Cup on the back of a strong performance in a four-nation invitational tournament in Valencia in October, where they defeated a strong field comprising Germany, Belgium and hosts Spain to emerge victorious.

Defender and drag-flick specialist Varun Kumar and promising striker Armaan Qureshi were in good scoring form for India, with both chipping in with goals in the 5-2 win over Germany in the title clash.

Other matches featuring on the opening day of the tournament are New Zealand vs Japan (Pool C), Germany vs Spain (Pool C) and England vs South Africa (Pool D).

The tournament, however, has lost some sheen with the last-minute withdrawal of Pakistan, who failed to get visas on time.

Meanwhile, adverse weather conditions and dense fog in north India may force the FIH to think about rescheduling and even shifting the matches to other grounds. On Wednesday, fog engulfed the Major Dhyan Chand Astroturf Stadium here, forcing the Malaysian team to delay their practice session by half an hour.