Puneri Paltan hasn’t been successful in translating their prowess on the mat to silverware in the ProKabaddi League. 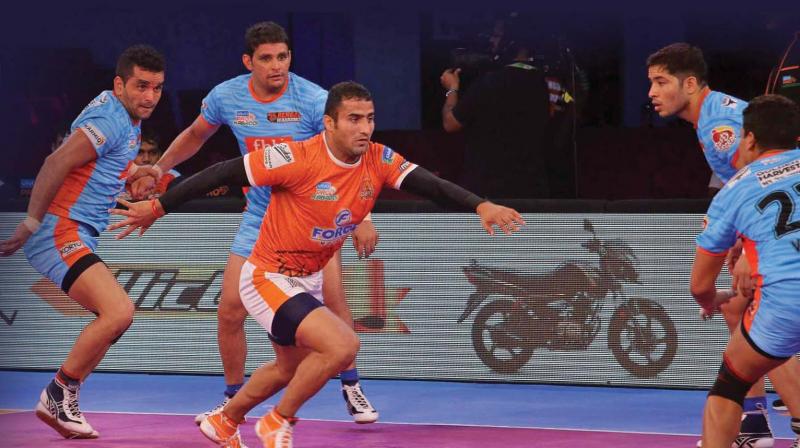 Sandeep Narwal in action during a ProKabaddi League match.

Puneri Paltan hasn’t been successful in translating their prowess on the mat to silverware in the ProKabaddi League. Displaying promising signs after two abysmal opening campaigns, the Maharashtrian outfit has ridden to the playoffs in the past three seasons consecutively only to falter on the big stages. But could they finally put an end to the jinx this year? Retaining the core of Rajesh Mondal, GB More, defender Girish Ernak and Sandeep Narwal — who formed the key cog and the addition of key raider Nitin Tomar is a testament to their hunger for glory.

While eventual winners Pardeep Narwal-led Patna Pirates drew curtains on their campaign last term, the men in orange boasted the stingiest defence in the league. The stats speak for themselves. Along with amassing the highest tackle points led by star defender Girish, Puneri Paltan also stood first on the list for most do-or-die raid points and all-outs conceded. And after splashing the cash heavily in the auctions, the Lions have found the missing pieces to the puzzle.

“The team is quite balanced with young and experienced players. We have Sandeep, Girish — two of the best corner defenders and Mondal. Even the youngsters are quite talented and have shown their quality at the state level. Every player is keen to leave a mark this season. I feel the team has all the required ingredients to go all the way,” Nitin Nitin spoke in an exclusive interaction.

Even star all-rounder Sandeep echoed similar views when questioned about the composition of the team. “There is no deficiency in the squad. From raiders to defenders to even the bench, the quality is good. Even the youngsters are quite well. We are giving it our all and working hard towards our goal. And we if are working hard we don’t need to worry about anything else because it will reflect on our performances. We are working as a team, supporting each other and hopefully we will do well.”

The presence of former India kabaddi captain Ashan Kumar as coach will boost their aspirations for the title. The Arjuna awardee was the mastermind behind the South Korean kabaddi team’s astounding run at the Asian Games 2018 where they returned home with silver.

“Every coach is determined to bring the best out of his players - whether you play for a club or a national team. Ashan sir has played at the national level, coached in big events like the Asain Games and brings a lot of experience. He frequently gives me tips on improving my abilities as an all-rounder, so my weaknesses are covered in that way,” Nitin added.

Teammate Narwal also waxed lyrical about the new Puneri Paltan gaffer. “Ashan is one of the best coaches I have worked with. It is always beneficial when you get to learn from someone with so much knowledge. He comes up with different training methods, tactics and various strategies. Whatever qualities you seek in a coach, Ashan has all of them.”

With Deepak Niwas Hooda changing alliances after a switch to Jaipur Pink Panthers, it’s Girish who will shoulder the captaincy duties for the upcoming season. Asked if he would have preferred to be appointed captain after Puneri Paltan broke the bank for him, Nitin responded, “Every player including the captain has just one goal and that is to perform best for the team. Everyone is captain in Puneri Paltan – Girish, Sandeep, Rajesh Mondal, GB More and myself. We need to realize our responsibilities and guide the team.”

New season. New players. New captain. New coach. Banking on a mean defensive unit under the mastery of Ashan Kumar with Nitin spearheading raiding department, Puneri Paltan seems to have ticked all the boxes. Regardless of the big names that make them strong on paper, once again, it is the big occasions that stand in their elusive quest for glory.