Puneri Paltan hope for a turnaround 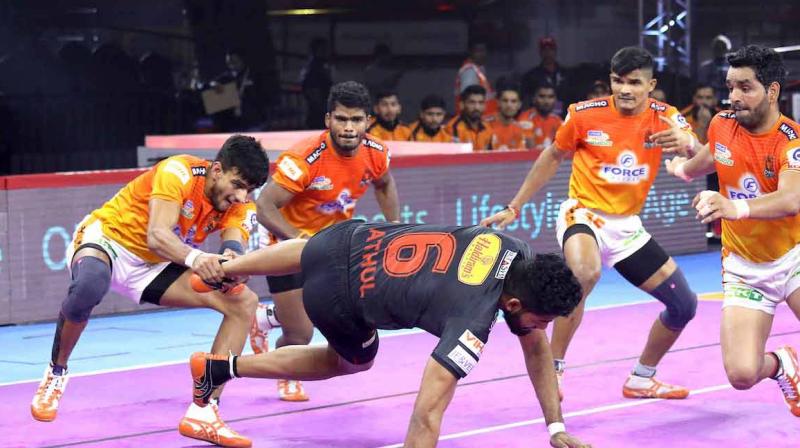 Action from the Puneri Paltan and U Mumba clash in Bengaluru on Thursday that ended in a 33-33 tie.

After playing a thrilling tie against U Mumba on Thursday, Puneri Paltan is all set for the upcoming Kolkata leg of the Pro Kabaddi League. The Pune based team will take on home team Bengal Warriors on Sunday night.

The franchise coached by legendary Anup Kumar played a closely contested Maharashtra Derby match against U Mumba in which both teams ended on 33 points at the Sree Kanteerava Stadium in Bengaluru on Thursday.

U Mumba raider Abhishek Singh clinched a Super 10 (11 raid points) for U Mumba as they clawed their back from being six points down in the final five minutes to secure a crucial draw. Mumbai led Pune 16-12 at half-time. The second half told the story of Puneri Paltan’s stunning resurgence but they couldn’t keep the lead.

“We did not have a raider on the mat towards the end. And that was a big problem. We had used up our substitutes and if we would have had a substitution in the bank, we would have tried to win the game,” Anup Kumar told reporters after the match.

“We had planned to maintain a deep line defensively and in offence, our strategy was to play on the do-or-die raid. We could easily use up a minute and twenty seconds during our raids, but in defence, we made advanced tackles that weren’t necessary,” Kumar added.

U Mumba skipper Fazel Atrachali rued that his team didn’t stick to the plan in the second half. “As a team, when you have a plan, you need to stick to that plan. In the second half, we couldn’t stick to it and the game drifted away from us quite a bit. And that probably was the difference between winning and tying,” he said.

Both the Maharashtra sides have played entertaining matches over the years and last season also they were involved in a thrilling tie. However, both sides are struggling this season. U Mumba are sixth in the points table with 37 points after 13 matches.

Puneri Paltan are currently 10th in the 12-team league with 28 points and have been able to win just four matches in 13 encounters. They will want to get the desired momentum from the Kolkata leg to keep their play-off qualification hopes alive.