The Malaysian girl, seeded in the 9-16 bracket, was in impressive form. 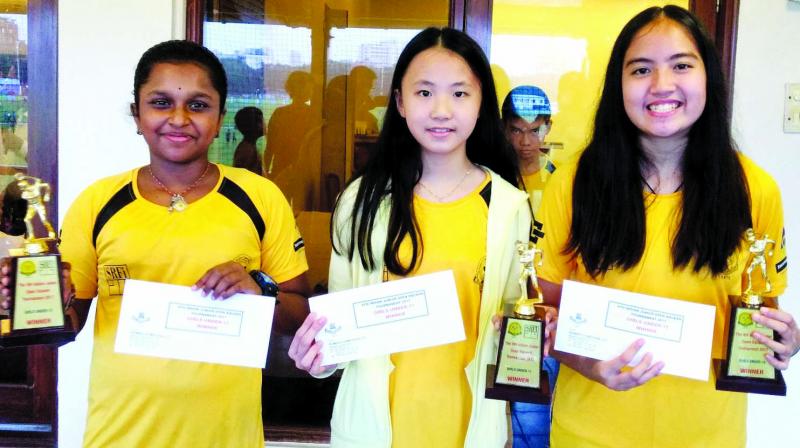 The Malaysian trio that emerged triumphant in the under-11, under-13 and under-15 competitions.

Malaysian girls claimed triple crowns with Aira Azman, Sehveetrraa Kumar and Anrie Goh, all emerging champions by winning the under-15, under-13 and under-11 crowns respectively in the Bombay Gymkhana-organised 9th Indian Junior Open Squash tournament, an Asian Squash Federation Platinum tournament and a 5-Star tournament on the Indian Junior squash circuit.

In the title clash, unseeded Aira tamed top-seeded Indian Ananya Dabke in three games. The Malaysian girl, seeded in the 9-16 bracket, was in impressive form. After some early struggle, she was in complete control. She hit some brilliant winners to unsettle her Indian opponent, who was unable to come back after losing the opening game over extra points. Aira won the next two games in convincing fashion to complete a deserving 13-11, 11-3, 11-5 victory, at the Bombay Gymkhana’s glass-back squash courts on Wednesday.

Meanwhile, Aira’s compatriot Sehveetrraa, the top seed in the girls’ under-13 event, was also in dominant mood and quelled the challenge from India’s second seed Yuvna Gupta, coasting to a comfortable 11-5, 11-3, 11-5 win to give Malaysia their second title.

Earlier, Anrie the top seed in the girls’ under-11 competition brushed aside a determined fight from India’s Diya Yadav, the joint 3-4th seed in four tough games to help Malaysia win their first title of the day.

In boy’s action, India’s Kanhav Nanavati continued with his giant-killing run as he overcame top seed Tanay Punjabi also from India in a long-drawn five games final. Kanhav, showing tremendous fighting qualities and plenty of resilience, managed to prevail over Punjabi by snatching a 11-4, 9-11, 11-4, 7-11, 11-9 win.