This Kuttappa was the Baahubali of Coorg hockey 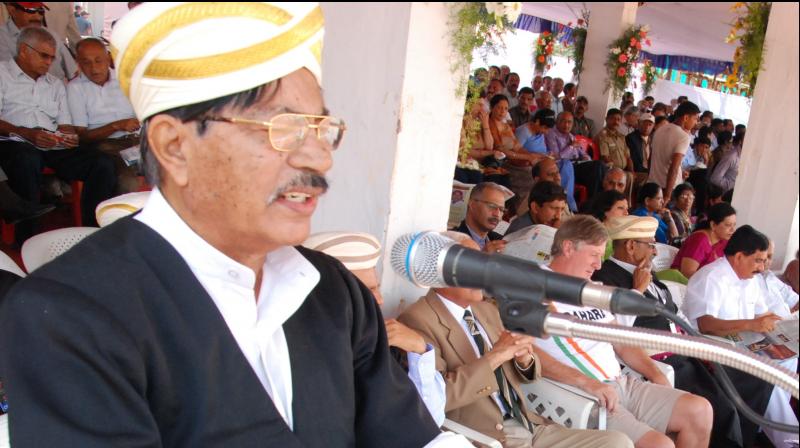 Pandanda Kuttappa, co-founder of Kodava Hockey Festival, who passed away on Thursday

Coorg: The world of hockey on Friday mourned an amazing man who promoted the game in Coorg by tapping into ethnic pride and kept it alive in the face of inroads made by packaged cricket.

Pandanda Kuttappa, a legendary figure in Coorg and co-founder of the famous Kodava Hockey Festival, died of old age-related problems on Thursday. He is survived by his wife, two daughters and a son, and remembered by countless thousands who love hockey. He was 85.

Along with his brother Pandanda Kashi Ponnappa, Kuttappa designed the Kodava Hockey Festival as a family hockey tournament exclusively for Kodava families. When it started in 1997—with finances arranged by the brothers themselves--few thought it would be anything more than a vanity event for a few years before everybody packed up and went home. They were wrong. The tournament tapped into the Kodava identity and gave it an intensity money-funded tournaments cannot match – be it the derby frenzies of football in England or the Oxford v Cambridge boat race. The Kodava Hockey Festival not only struck a chord in the coffee plantations of Coorg, it made the region a nursery for the game, producing an entire sequence of star players who graced the Indian national team.

Paying rich tributes to Kuttappa, Hockey India on Friday recalled his contribution to the sport and his crucial role in popularising the game in the south and making Coorg the breeding ground for hockey in the country.

"We are truly saddened by the demise of Pandananda Kuttappa. We share his family's grief and pray for his soul. Kuttappa's contribution to hockey especially in the Kodava region will be remembered for generations," HI president Mohd Mushtaque Ahmad said in a statement.

The Family Hockey Tournament not only sees intense competition but also draws thousands to the hockey pitch. Interestingly, it has no gender bar for the participating teams. Women could play in the same team as men.

On an average, 250 families send teams to the tournament which is usually played during April-May every year.

Despite there being no age or gender bar for participating in the matches, the tournament is highly competitive, involving high-caliber hockey. Some strict rules apply: such as that all members of a team must belong to the same clan and participate in full hockey attire. It is for a woman to decide whether she wants to represent her father’s family or husband’s.