Dilpreet Singh scored the opener before penalty corner specialist Harmanpreet Singh put them 2-0 up with a trademark drag flick. 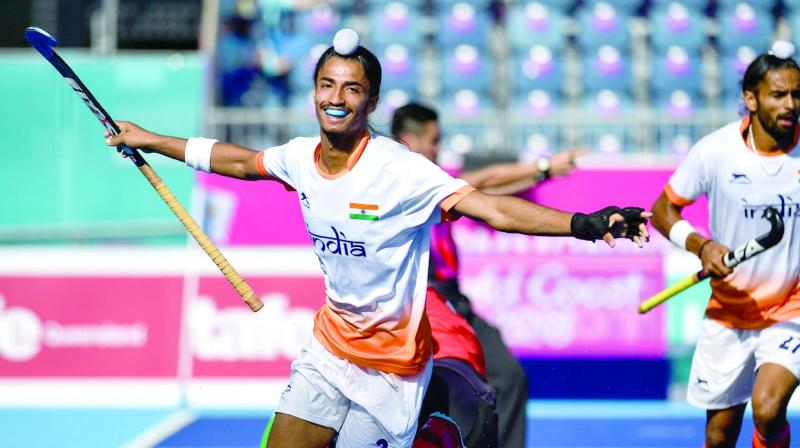 Gold Coast: India were urged to control their emotions after a bad-tempered Commonwealth Games hockey clash with Pakistan ended in a thrilling draw on Saturday — with the video referee proving crucial.

India were 2-1 up with just seconds left when Pakistan twice went to the video referrals to earn penalty corners, the second of which was buried by 20-year-old Ali Mubashar.

Two green cards and four yellow cards were brandished in what proved a typically spiky match between the arch-rivals.

“We were not happy with the performance. We wanted to win this game. We are disappointed with the result,” said defender Rupinder Pal Singh, slamming India’s lack of discipline.

“That’s disloyalty to the team, and that’s where we need to control our emotions. Sometimes we are so aggressive in our tackles.”

Dilpreet Singh scored the opener before penalty corner specialist Harmanpreet Singh put them 2-0 up with a trademark drag flick.

But Muhammad Irfan gave Pakistan a lifeline early in the second half when he tapped in after a counter-attack.

Shuttlers cruise into semis
Kidambi Srikanth led from the front as India thrashed Mauritius 3-0 to advance to the semi-finals of the badminton mixed team event.

The men’s doubles duo of Satwik Rankireddy and Chirag Chandrashekhar Shetty hardly broke a sweat in their 21-12, 21-3 win over Aatish Lubah and Christopher Jean Paul in the first match before Ashwini Pannappa and N. Sikki Reddy chalked out an 21-8, 21-7 victory over Aurelie Marie Elisa and Nicki Chan-Lam in the women’s doubles. India take on Singapore in the semi-finals on Sunday.

Away from the spotlight, both the men’s and women’s table tennis teams entered the semi-finals. Both the teams were up against Malaysia in their respective ties and came out trumps with identical 3-0 margins.

However, as was expected, the Indians competing in swimming, gymnastics and cycling could not throw up any medal surprises and remained in the lower ranks of their respective competitions.