The rally, to be held over two days, is divided into six stages and will cover a distance of 430 km. 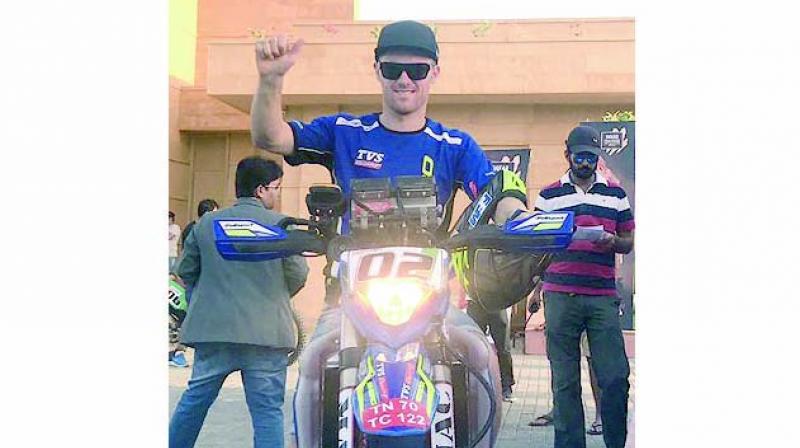 TVS team’s driver Adrian Metge at the flagging-off of the event.

Jaisalmer: Golden dunes, a sun-kissed Thar desert and soaring temperatures... these catch the eye as the India Baja 2017 Dakar Challenge Series, organised by Northern Motorsport, gets ready to roll out over the weekend.

A total of 70 participants are in for a gruelling two days of competition that is set to test their skills, physical endurance and patience in searing heat.

At stake is a double bonanza. The Baja, running in its second year, has earned the distinction of being a Dakar Challenge event — a first in the country. And the winner will earn tickets to the Merzouga Rally in Morocco and the prestigious 2018 Dakar Rally, that has seen only two Indians participate till date.

One of them, C.S. Santosh, will miss out the Baja this year with an injury. The accomplished rider, who won the inaugural Baja rally in 2017, was present on the day to cheer on the participants who engaged in last minute checks and the official flag-off. The other, K.P. Aravind, who took part in this year’s Dakar race but could not complete it, will represent TVS Racing along with France’s Adrian Metge, Abdul Tanveer and T. Nataraj.

Among the top challengers will be Portugal’s Joaquim Rodrigues of Hero Motorsports Team Rally and is expected to finish on the podium on Sunday.

Aravind, who is making a return from injury, said hosting the Dakar challenge series in India was a huge platform for youngsters in the country.

Said Aravind, “The fact that the Baja Dakar Challenge is being held in India is a testimony of the growing rally culture and will inspire youth to take it up since it is being held at their home.”

For Europeans J-Rod and Metge, this is their visit to India and the duo are enjoying the culture and different conditions.

The rally, to be held over two days, is divided into six stages and will cover a distance of 430 km. In the four-wheel section, focus will be on veteran cross-country rally driver Sunny Sidhu and Raj Singh Rathore.