And the one name that stands out among the upcoming players is West Bengal girl Rituparna Das. 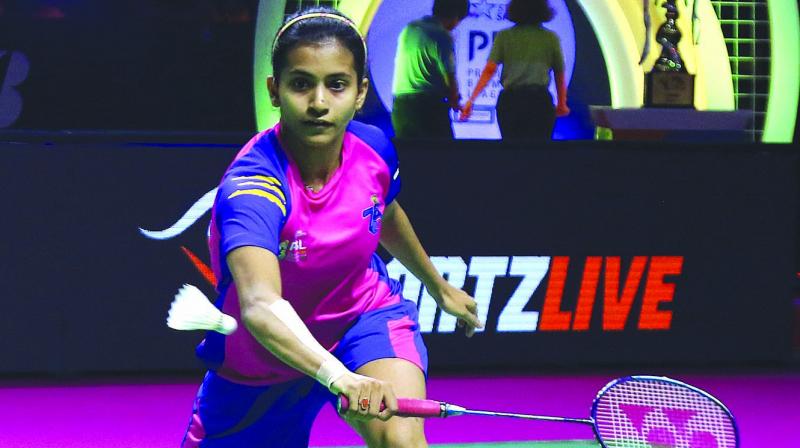 Premier Badminton League franchisee Pune 7 Aces had a successful outing in their debut season and a lot of credit for that goes to their gang of young players. Pune booked their place in semifinals after beating Hyderabad Hunters in their last league match on Wednesday.

And the one name that stands out among the upcoming players is West Bengal girl Rituparna Das. She upset World No. 14 Beiwen Zhang before going down to P.V. Sindhu en route to her first PBL semifinals.

“It has been a great experience. The fact that all top-level players are so humble in spite of so many achievements is a beautiful thing to see and learn. I am getting opportunities to play against top-level players, getting to know how they train. Everybody motivates each other on and off the court. This really helps me to keep striving for doing better,” Das, who hails from Haldia, said.

“During the pre-PBL practice sessions my primary objective was to focus on my speed. Being a short player I really need to work on this aspect in order to have better chances in the match,” added Das, who aim to break into top 50 in the world this year.

Sharing her best experience at the PBL 5, the 23-year-old said. I feel the best experience so far has been seeing the team cheer me on when I am playing. This
is something, which every badminton player needs.

Nagpur girl Mugdha Agrey was the other talented name in the squad.

The world No. 71 is amongst the Top 3 Indian players after Sindhu and Saina Nehwal. She is trained by Jibi Verghese. Meanwhile, Mugdha is very happy to have got a chance to play with the best players of the world in PBL.

“The PBL and Pune 7Aces is a whole new experience getting a different idea about Indian as well as international players has been an enriching experience. It is really great everyone is working as a team. Even though we are from different parts of the world it feels like a family,” said Mugdha, who was initially ignored by the PBL franchises during the auction. A Vietnamese player has opted out citing personal reasons and  Mugdha came as a replacement to Thi Trang Vu in the team.

“I have been playing in the international circuit from past 3 years so not much of a difference but playing as a team has been a different experience. It is very important to understand that it’s not the individual match but how we strategically plan our matches as a team.

“My only expectation is for the team to give their 110% in every match and also enjoy each and every moment on and off the court.

For Mugdha, managing the team’s travelling and training schedules is the biggest challenge as it can often get a bit tiring for her but she aims to break into the top 30 in the world this year.

Mithun Manjunath’s heroics paved way for Pune to enter the semifinals in their last league match against Hyderabad Hunters.

Playing in her second season, Manjunath is churning out a lifetime experience sharing locker room with the higher-ranked India and internartional players.

“I am really enjoying my time with Pune 7Aces. The tournament and the team are acting as a major base for training for the upcoming international tournaments. It is a very friendly environment within the team. We keep it light no matter what the situation. It has been a great experience. We have a lot to learn from them on court as well as off court,” the 21-year-old said.

Mithun aims to win the international challenges and the super 100 tournaments this year and Lin Dan is his favourite player and he also admires Japan’s Kento Momota.

“Considering I play in singles there hasn’t been much attempt to tweak the technique but the major emphasis has been on being consistent in the matches. I can’t categorise anything as the toughest right now. At the moment everything is a challenge as well as a learning experience.

Other upcoming player M.R. Arjun echoed the same view and said, “PBL has played an important role in every player’s career I would say. Playing at such a big stage is a great opportunity for all of us. Gives us the much-needed exposure and the environment is really conducive for a player to learn. We have a good chemistry within the team and the team also has bonding sessions to help us understand each other better.”