No handicap stands in his way

A graduate in Commerce and Foreign Trade, he did some odd jobs for survival until he reached the film industry. 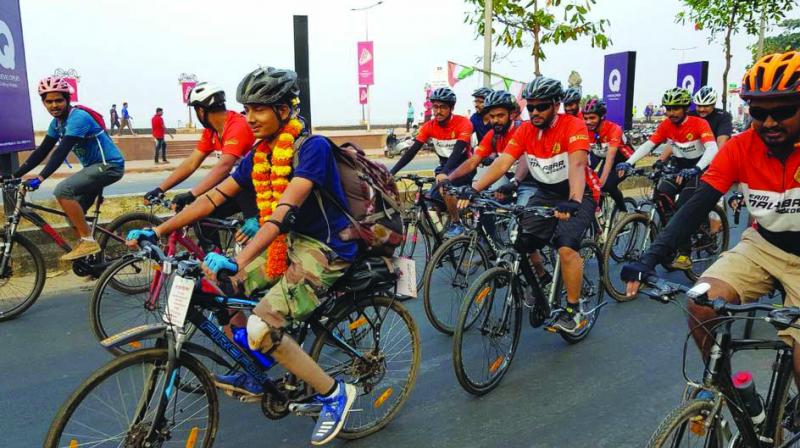 The tour that began on November 14, 2017 will conclude on June 18 in Madhya Pradesh.

By the time you start reading about Pradeep Miradwal, he’d have left the state of Kerala holding close to his heart a clutch of fond memories and hospitality. On Friday, he will pedal  towards Kanyakumari, beginning his tour in Tamil Nadu.

It has almost become an everyday thing to find one rider or another touring India on a cycle. But Pradeep’s mission and vision stands out for his endurance and perseverance. The 30-year-old from Indore rides with his amputated left leg fitted with a prosthetic. His aim? To ride 15,000 kilometres across 29 Indian states, of which 3,770 is already over.

Calling him a living wonder is no exaggeration. Other than riding, Pradeep dances and has been a participant of a live show, Dance Indore Dance. “I dance to Bollywood songs. From 2008 onwards I am in the film industry as a dancer, actor and model,” he says.

Tragedy dealt him a sharp blow in 2013. During a pilgrimage tour, Pradeep slipped from a train and the accident left him an amputee. “I started riding well ahead of the accident. With the help of a Jaipur leg, I regained the confidence to ride again and here I am at it,” he says.

He is on a cycling expedition with a cause, holding the message of ‘Clean India, Green India and Healthy India’ and those of environment protection and road safety programme. Since 2014, he has been the vice-president of Yuv Viklang Manch based in Madhya Pradesh.

A graduate in Commerce and Foreign Trade, he did some odd jobs for survival until he reached the film industry. He recollects his first job in a clock shop for a sum of Rs 300 per month. From there, he switched various industries till reaching his dream destination. “I have given my 100 per cent to acting,” he says with pride.

Along the route, he is offered accommodation and encouragement by cycling enthusiasts. “Tamil Nadu is the sixth state I am covering after travelling across Madhya Pradesh, Maharashtra, Goa, Karnataka and Kerala,” he says.

The tour that began on November 14, 2017 will conclude on June 18 in Madhya Pradesh.