Want to win at World Championship for my country: Gaurav Gill

The 37-year-old saw it as a big boost, not just to his career, but the overall sport in India as well. 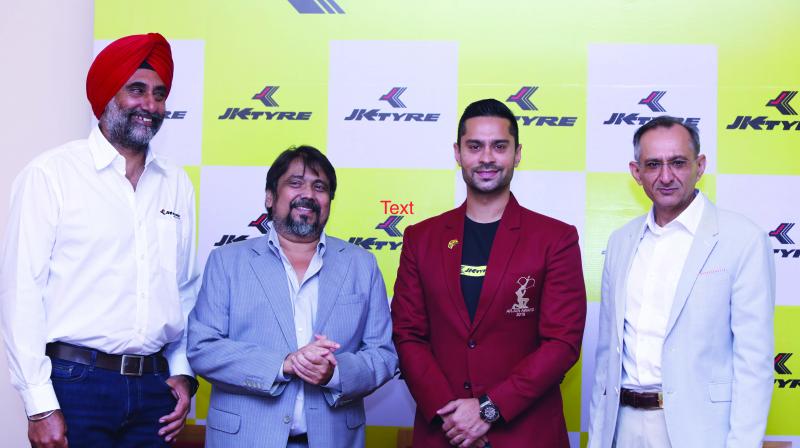 Gaurav Gill (second right) at a function to announce plans for the FIA World Rally Championship 2 with JK Tyre officials in New Delhi on Friday.

New Delhi: Ace racer Gaurav Gill is in the spotlight after becoming the first Indian motorsports personality to get the Arjuna award. The 37-year-old saw it as a big boost, not just to his career, but the overall sport in India as well.

The three-time APRC and six-time National Rally champion now aims to win the World Championship for his country and prove his mettle.

Gill will embark on a new and exciting mission to make his mark at the FIA World Rally Championship 2, in the Rally of Turkey from September 12 to 15. He will be driving a new car 1.6 Turbo R5 that has been developed by M-Sport. Supported by JK Tyre Motorsport, the rally ace will fancy his chances as most of the stages in the Rally of Turkey will be run on gravel, something that he relishes. Gill will be competing as a registered driver for the first time and will be picking up championship points, making it a huge landmark for Indian motorsport.

In an interview with this newspaper, Gill talked about his life after winning the Arjuna award, his responsibility towards the sport, upcoming World Championship and his future endeavours. Excerpts:

Q. What was the first reaction when you got to know about getting Arjuna award?
I had returned from the practice and was in the middle of my afternoon nap when somebody called me to break the news. Then I came to know that I am shortlisted for the Arjuna award. It took me a few days to realise this has happened… and it is an amazing feeling, especially to share with my family.

Q. What changes do you see in yourself after the Arjuna award ?
I am more competitive and hungrier to prove that they have given it to the right person. Now I am going to the World Championship and I’m hoping that I can give my best performance. It will be not easy, but I will try my level best. I am working hard and this award motivated me to  perform even better. My aim is to win at the World Championship. Last year in Australia I came very close. I was leading but because of a mechanical issue I could not win. This time I want to win for my country.

Q. Do you think your responsibility towards motorsports has increased?
I will try my best to do popularise and upgrade the sport. It has been a long journey. I had started with two wheelers and then moved on to four wheelers and won accolades at the world championship level. It is very important to have a face or star in every sport and that’s how the sport gets popular. I am very happy that the sports ministry has chosen me for the Arjuna award. I have my academy as well. I choose and groom young talents.

Q. Do you think your Arjuna award will boost the sport?
I am flooded with calls and messages about my academy and people wanting to pursue the sport.

Not only me, JK Motorsport head Sanjay Sharma is also getting more calls. Now parents are sending their kids to go-carting and they realise that there is a future in motorsport unlike earlier. Now there is a light at the end of the tunnel and now there is a career path.

Q. You will race with a new car at the World Championship. Don’t you think it is a great risk?
It will be very difficult to run a new car. I sound relaxed but I always had a fighter attitude and I am very hard on myself. Be at your best or go home that’s what I say to myself. I will go to Turkey with this attitude only. It is a risk but u cant success without risk. I will practice on my new car on Monday but that would not be enough but I will try squeeze as much as I can from my new car.

Q. Tell me about your new team?
My co-driver is Glenn McNeal from Australia and he has been with me from last 11 years. We will continue as a team and I am driving with M Sport Ford UK and they are the most powerful team in the world championship. They have developed a new car. So, hopefully that new car should give us a strong result. It is powerful and I am hopeful of a good result.

Q. What is your opinion on the competition at the World Championship?
Ans. It is extreme. Nobody waits for you. Cut throat competition. Its like if you are not the best, you are the last. Nobody cares about anybody. Teams from other countries have big budgets, but In India we have a different scenario and I have to perform with limited resource and money. I will push as much as I can.

Turkey is one of the new venues in the championship. They introduced it only last year. The reason I chose it because it was new. It is also very rough and similar to the Himalayan terrain. That is also one of the reasons I chose it. The temperature will be higher and we also come from a hot climate, so it suits me.

Q. What are your future plans?
We haven’t chalked out any future plan. Let’s see how this rally goes, then we will plan further. UK and Australia are on the cards. I am very strong in Australia because I was leading there. So definitely it is on the cards.