The Mahindra Adventure driver clocked a cumulative time of 41.86 minutes and recorded the best timing of the day across two stages. 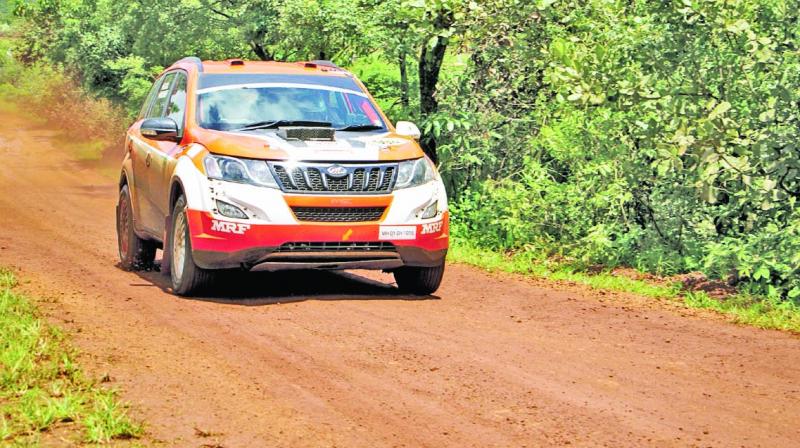 Gaurav Gill in action on Thursday.

Belgavi (Karnataka): Gaurav Gill continued to be at the top of the leaderboard for the fourth consecutive day at the Maruti Suzuki Dakshin Dare competition here on Thursday.

The fourth day saw the rally held in three stages.

The Mahindra Adventure driver clocked a cumulative time of 41.86 minutes and recorded the best timing of the day across two stages.

“The track today was rough in parts compared to the other days and we had to use a different set of tyres to cope up with the slippery conditions”, said Gill at the 04:42 07-09-2018end of the day. The track had taken a beating due to the overnight rains, which made it a tricky surface to all the drivers.

Amittrajit Ghosh suffered a breakdown in the final stage of the day to dent the chances of team Mahindra Adventure’s quest to lay claim for the top three spots in the competition. Ghosh could not complete the race due to damage on his car’s fuel propeller.

The competition this year turned out to be futile for Ghosh as he had endured a flat tyre in the first three days.

Samrat Yadav for team Maruti Suzuki moved up the leaderboard cashing on the failure of Ghosh to capture the third position and giving hope of earning a podium finish for the team.

Yadav clocked a cumulative time of 42.14 minutes, including the second best timing of the day. The competition enters into the final day, which will see the rally participate across two stages in Kolhapur, Maharashtra.