After battling home sickness, Thakkar finally found his stride and began to win at Under-12 and Under-14 events. 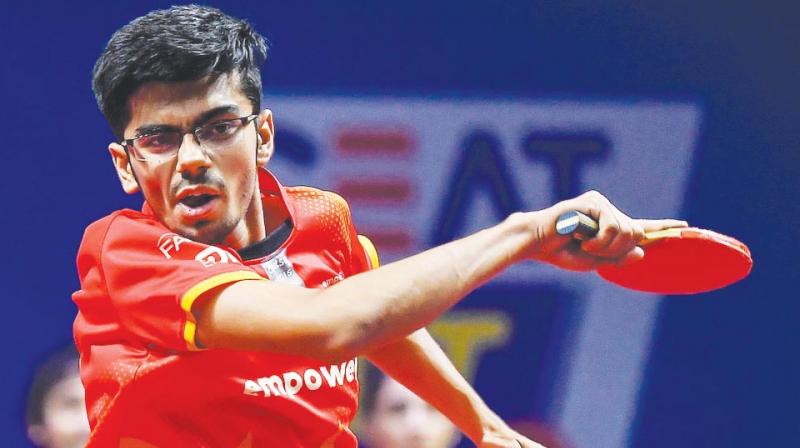 Manav Thakkar became the first Indian paddler to achieve world numero uno status at any level when he topped the Under-18 category in February this year and the Gujarat boy is determined to extend his impressive run to the senior circuit as well.

“Transition is difficult as at the junior level, players are not that superior in terms of power and strokes… But if I keep playing more and more matches with the senior players, I will overcome those hurdles. I am determined to work hard to rise on the senior circuit,” the 18-year-old said.

The teenager recently created waves at the just-concluded Ultimate Table tennis where he was the youngest player representing the Empowerji Challengers and went on to upset world no. 33 Kou Lei of Ukraine in his first match. He continued his giant beating run when he upset world no. 18 Kristian Karlsson of Sweden.

“Before the matches I watched their videos and studied them closely. That helped me at the UTT,” he said.

With the Chinese and Japanese dominating rankings across categories, the road ahead for the ambitious Thakkar is a tough one.

Thakkar, currently 243 in the senior rankings, started off at around 450 in the beginning of 2018 and has moved up on his performances.

With a loaded calendar ahead, his top priority for the year is to win a medal at the Youth Olympic Games in Buenos Aires in October.

Thakkar is also on the Asian Games squad and will eye an encore of his title run in Italy at the Junior World Championships later this year.

“After domestic tournaments in Chandigarh and Indore, I will go to Korea and Australia for senior tournaments. The Asian Games is also around the corner and Massimo Constantini has helped me improve my game. These tournaments will help me prepare better for the Youth Olympics and hopefully I can perform well there.”

Asked what it felt like to be world no. 1 in the U-18 category, Manav said, “It feels great as I was the first Indian to achieve that and last year it was a string of performances I’d put in on the junior circuit such as winning the Slovenian Open and a silver at the Thailand Open.

“But this was only possible because of the hard work I’d put in throughout and it was a very proud moment for me and my parents as well,”

Born in Surat, Thakkar took to the sport at five after watching his parents play at home. “I was shorter than the table but still managed to return the ball three to four times,” said Thakkar, who also was a skater back then.

At age six, his parents decided to encourage him in table tennis given his flair. He was initially guided by childhood coach Vahed Malubhai. In 2011, he shifted to Ajmer and joined the Petroleum Sports Promotion Board.

After battling home sickness, Thakkar finally found his stride and began to win at Under-12 and Under-14 events.