Devadiga excelled in do-or-die sitautions in the tournament to end the drought for the state at the national kabaddi tournaments. 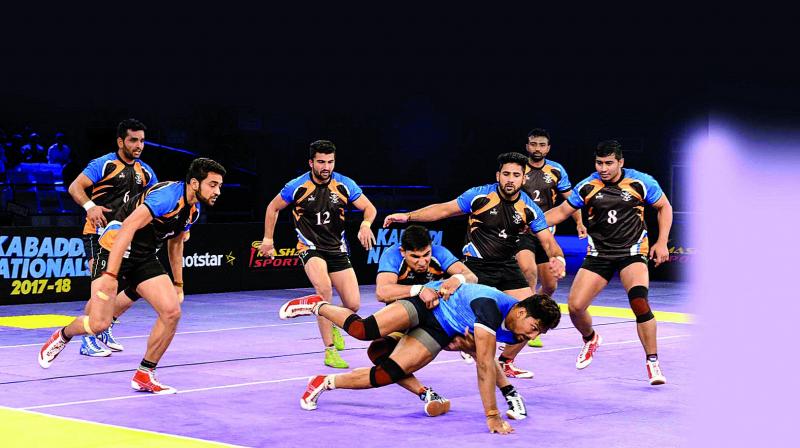 “Many players from the Maharashtra team have done well consistently. It is time to reward their efforts,” he added.

There was not even a single kabaddi player from Maharashtra in the triumphant Indian 2016 Kabaddi World Cup squad in Ahmedabad. But at the start of the new year, the state team under Rishank Devadiga, turned the tables by winning the elusive national title.

“It has been a well deserved win as our boys fought well throughout. I am hopeful this remarkable win will help the selection committee of the Amateur Kabaddi Federation of India to rectify past mistakes and include at least three-four players from Maharashtra in the Indian squad for the Asian Games,” said Maharashtra coach Manik Rathod.

“Many players from the Maharashtra team have done well consistently. It is time to reward their efforts,” he added.

Devadiga, who led from the front in his first nationals as skipper, credited team effort for the state team’s triumph in the 65th Senior National Kabaddi Championship. Maharashtra pipped Services 34-29 in a plusating final at the GMC Balayogi Indoor Stadium in Gachibowli, Hyderabad on Friday night to win the title after a gap of eleven years.

Devadiga excelled in do-or-die sitautions in the tournament to end the drought for the state at the national kabaddi tournaments. “I have been representing Maharashtra for the last 5-6 years and it was a dream to play in the final. Unfortunately, we never went past quarters before. But this year we were more determined to play the final. The positive vibes set in from the time we got together for a eight-day preparatory camp in Satara. The team stayed united and positive throughout, which made a difference this time,” he said.

Maharashtra won all their three league matches before beating Delhi in the pre-quarters. In the quarterfinal, Maharashtra proved to be the superior side as they nailed Uttar Pradesh by a 44-36 verdict.

Then came the nail-biter against Karnataka, which Maharashtra won by one point, courtesy the buzzer raid by consistent performer Devadiga again. “It was a great match. My native place is in Karnataka but I was born in Mumbai and have been playing for Maharashtra, so I did my best for my team as I do in any other match. We had decided before the tournament that I will go for the do-or-die raids and it came off well,” said the Santacruz resident.

In the final, Maharashtra were up against defending champions Services and Devadiga was up against his Pro Kabaddi League franchise UP Yoddha skipper Nitin Tomar. Services had ousted in-form Haryana with a 32-28 win in the semi-final. Devadiga clicked again under pressure to put his team on top with Tushar Patil doing the damage in do or die raids.

“We took a crucial time-out and young Tushar did the job for us by winning three points. It was good effort by him in a testing situation,” Rathod said.

Commenting on the final match, Devadiga felt, keeping the lead benefitted them,

“Services had a strong team. They have been in the final for the last three years. We had a clear plan and strategy from the outset. I had the belief that I will score points whenever necessary. We didn’t want to slow the pace and tried to score as many we can. We defended well too. We were leading from the start which helped us as we didn’t feel pressure at any point in the game.”

Devadiga has been playing in the Pro Kabaddi Legue like his other teammates Madane and Ernak, who were instrumental in Maharashtra's title triumph. But the 25-year-old is still awaiting his maiden national berth. “I have played in the Beach Asian Games but my target is to play for India in the Asian Games this year. I have proved my fitness and performed consistently, inluding in this tournament. I am hoping for an entry into the Indian team.”

Emerging players
Tushar Patil from Kolhapur did the job for Maharashtra in a do-or-die situation in the final. His composure under pressure earned praise from coach Manik Rathod and the 23-year-old is the one to watch out for in the future. Young Rituraj Korvi from Kolhapur was instrumental in the quarter-final against Uttar Pradesh. It was his first nationals and coach feels he would have learnt a lot from the tournament.