The Pro Kabaddi League season two champions will rely on defence led by Iranian Fazel to change their fortunes this season. 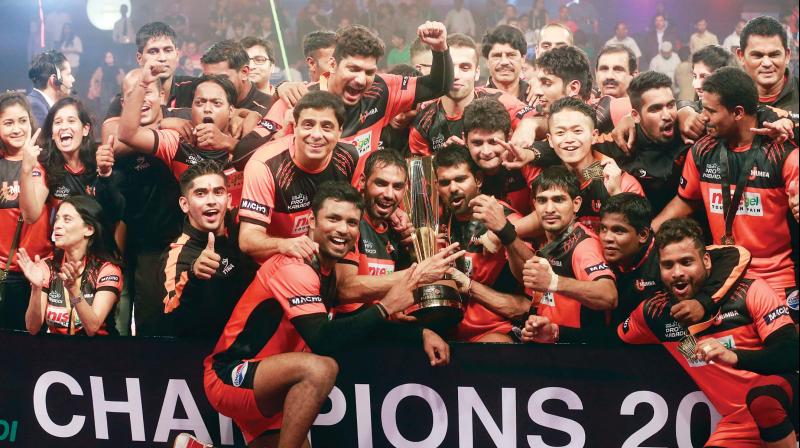 Team members of U Mumba pose for a team photo after winning the Pro Kabaddi League title 2015 in Mumbai.

U Mumba started the Pro Kabaddi League with a bang by reaching the finals in the first three seasons. However, they failed to reach the semis in the fourth season and had an ordinary season in 2017, finishing fourth in Zone A.

Now, the revamped side under Iranian skipper Fazel Atrachali will be looking to repeat in the sixth season what they did in the second season - lift the trophy. Incidentally, Fazel was part of the winning U Mumba side and has returned to lead after city-based franchise owned by Ronnie Screwvala’s Unilazer Ventures Pvt Ltd. went overboard to purchase the Iranian defender at the auction. Fazel is the most expensive U Mumba player after he was bought for Rs. one crore.

The franchise placed in Zone A in the 12-team event will start the season against Puneri Paltan in Chennai on Sunda and will take on Jaipur Pink Panthers on Wednesday. They play their home matches at Dome NSCI SVP Stadium, Worli but it will be towards the end of the season as the venue is also set to host the final on January 5.

U Mumba had become Pro Kabaddi league 2015 champions after beating Bengaluru Bulls in the final. But the team’s think tank, after a couple of poor seasons, decided to go for a new look during the Pro Kabaddi league auctions. They didn’t go for their skipper of previous seasons Anup Kumar and picked just three of their former players - Surender Singh, E Subash, and Shiv Om. They will rely more on experienced defence with Fazel being the key player and Vice Captain Dharmaraj Cheralathan to support him. Rohit Rana and Surender have also done well in defence. Fazel played as a part of Patna Pirates and Gujarat Fortune Giants where he showed his best game. He has played every final since his debut in the League.

U Mumba are the only franchise in the Pro Kabaddi League to have signed an overseas coach this season when they made Gholamreza Mazandarani their head coach. The Iranian coach has led the national side to deliver incredible performances at events such as the Kabaddi Masters Dubai and the recently concluded Asian Games 2018. Iran beat India to win the gold medal for the first time at the Asian Games.

The team’s pre-season camp at Nashik, however, was hit after their Iranian coach and captain didn’t receive his visa on time, but according to sources they later were given the visa and had some training with the team in Nashik before leaving for Chennai.

This time Kochi has been added as a venue and ProKabaddi League will be travelling to 13 cities. Like last season, 12 participating teams have been divided into two zones of six teams each, where each team will be playing a set of 15 intra-zone and seven inter-zone matches. There will be one more round of inter-zone games called the Wildcard matches. The playoff stage will comprise of three eliminators, two qualifiers and the finals.