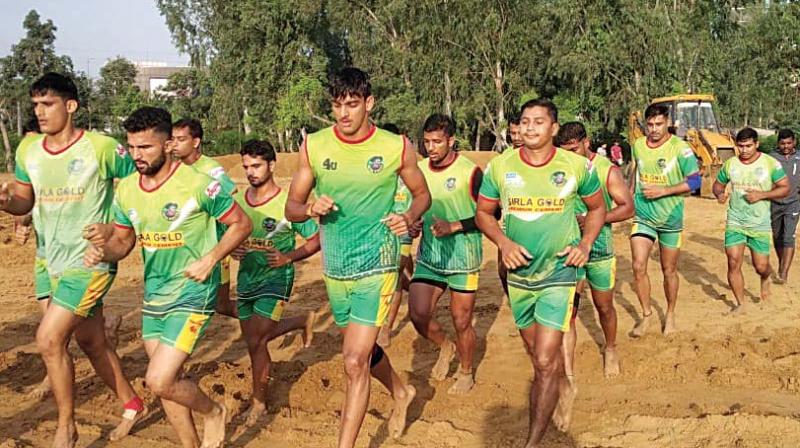 Patna Pirates players at a training session ahead of the Pro Kabaddi League Season VI.

Pardeep Narwal was retained as the captain of the Pro Kabaddi League Season V champions Patna Pirates and the star raider is confident that they will successfully retain their title.

“We have always thrilled our fans. We will aim to retain the title in season VI by scaling up the performance and making sure each squad member gives their best without getting under the burden of expectations,” Narwal, who is also known as Dubki King, told this paper.

“We have a fine balance of experience and young players who are focused and capable to perform at the highest level of competitive matches. We underwent a very scientific training process at the camp to help us keep fit for the games that will go on for over 13 weeks,” he added.

Three-time consecutive title holders Pirates will play their first match on Sunday against Tamil Thalaivas in the tournament opener in Chennai.  The Pirates has been placed in Zone B and will compete against Bengal Warriors, Bengaluru Bulls, Telegu Titans, Tamil Thalaivas and UP Yoddha.

“The squad is undergoing through strenuous fitness drills for conditioning and strengthening regimes. We are working on our physical fitness and mental strength at the camp to ensure that there should be no injury during matches.

“The month-long training module at the camp is designed to prepare every team member for the highest level of performance during matches.”

The chief coach of Patna Pirates Ram Mehar Singh, who also coached the Indian team at the Jakarta Asian Games, echoed the same view, said, “We will capitalise on the combined strength of experience and youth while keeping consistent eye on strategies of other teams.”

Coach informed that they emphasised on the holistic fitness of the players as they undergo yoga session followed by physical exercise and match practice to keep them rejuvenated through out tournament.

Eliminator 1 and 2 will take place on December 30 in Kochi.

Qualifier-1 and Eliminator-3 will take place the next day at the same venue.