Sandeep Sharma (05:18:19) continued his climb towards the top of the ladder, moving up to the third position. 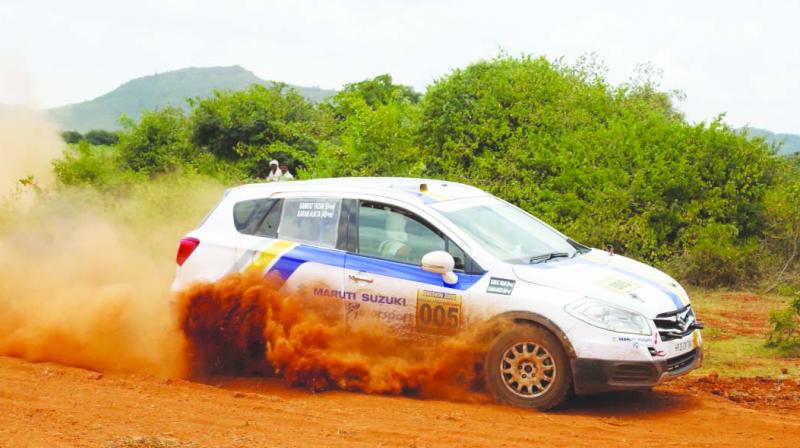 Action from the Day Three of the Maruti Suzuki Dakshin Dare.

Davangere (Karnataka): Gaurav Gill held his lead at the top of the leaderboard for a third consecutive day for team Mahindra Adventure at the Maruti Suzuki Dakshin Dare competition here on Wednesday.

The third day saw the rally held across four different stages. Gill along with Musa Sheriff will be looking to clinch the top position with two days remaining in the rally.

He has a total time of 04:59:45 after the three stages; a safe cushion of approximately eight minutes over his team mate Philippos Mathai (with PVS Moorthy); who is placed second with total timing of 05:07:15.

Sandeep Sharma (05:18:19) continued his climb towards the top of the ladder, moving up to the third position.

Amitrajit Ghosh and his co-driver Ashwin Naik had a flat tyre for the third straight day, which saw him slip to the fourth position. He lost close to four minutes and finished with an aggregate time of 05:19:06.

Samrat Kumar (with Karan Aukta) of Maruti Suzuki Motorsports is on fifth position with a total time of 05:19:29.

In the bike category, Yuva Kumar and Akash Aital maintained their hold on first and second positions, while Jatin Jain is on third position after three rounds.

“From here it’s all about playing safe for the benefit of the team and seeing out the rally,” said Gill.

Team Mahindra Adventure currently leads the rally with three of its drivers in the fray.

The competition enters into the next stage in Belgaum on the fourth day and later moves to Kolhapur in Maharashtra finally culminating in Goa.