The Mumbai based shuttler elated to create history with Satwiksairaj by winning doubles title in Thailand Open. 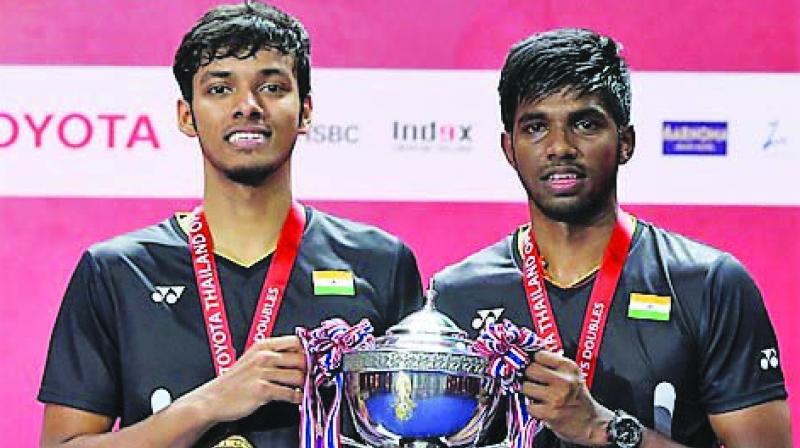 Mumbai shuttler Chirag Shetty made history by winning the Thailand Open with his doubles partner Satwiksairaj Rankireddy in Bangkok on Sunday. The Mumbai and Hyderabad shuttlers became the first Indian pair to win BWF Super-500 tournament. Before them, only four Indian singles players have won the Super Series title.

“I am extremely happy with the win, no other Indian pair has won super 500 in world tour events basically super series events. Only four Indians Sai (Praneeth), Srikanth (Kidambi), (P.V.) Sindhu and Saina (Nehwal) have won in Super Series titles in singles. Extremely happy I could get this win for our country,” he said on Monday.

The pair had risen in ranks in the last couple of years and won the historic silver at the Commonwealth Games at Gold Coast Australia last year. But they failed to repeat the performance at the following Asian Games and were knocked out in the second round.

However, the youngsters rose up in following tournaments and their revival was complete by downing world champions Li Jun Hui and Liu Yu Chen of China 21-19, 18-21, 21-18 in the Thailand Open final on Sunday.

“Words can’t describe what happened on the court yesterday! It was always a dream to win a super series level tournament and now here we are with the Thailand Open title! Beating the current world champions from China in a very close encounter which could have gone either way,” he said.

Incidentally, after a poor show in Asian Games, Shetty had turned to his coach Uday Pawar at Goregaon Sports Complex who told him to stay calm in pressure situations and gave him some technical advice. The pair learnt a lot from Asian Games and avoided creating the same mistakes. Chirag and his partner showed the maturity to stay calm against the Chinese pair on Sunday in a see-saw game.

“Extremely happy that we could keep our calm and get those crucial points in the end when it mattered the most,” said Shetty while thanking ‘Uday Sir’ and Indian doubles coach, support staff and family members.

Shetty who did his schooling from Ryan International school started playing at the age of seven under former international Uday Pawar at Goregoan Sports Complex. The talented shuttler still trains at GSC whenever he is in Mumbai.