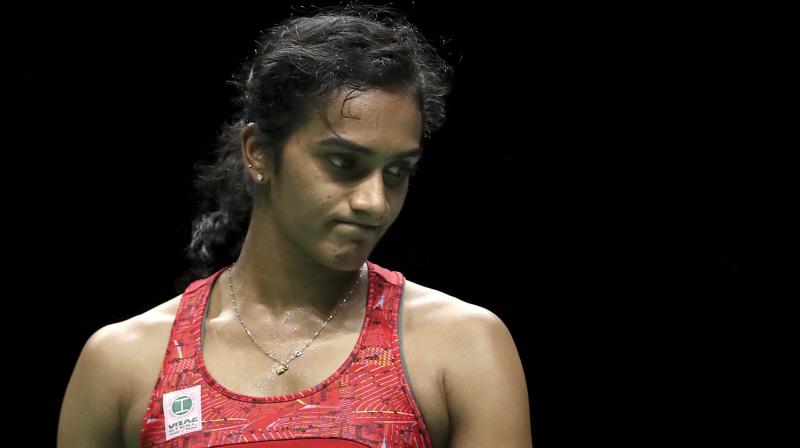 P.V. Sindhu after her 21-19, 21-10 loss to Carolina Marin of Spain in their World Championships final at Nanjing, China, on Sunday. (Photo: AP)

Nanjing (China): Carolina Marin claimed a slice of history as the Spaniard became the first woman to win three badminton world titles with an emphatic victory over P.V. Sindhu on Sunday.

The aggressive Marin is now the reigning world and Olympic champion thanks to an imperious 21-19, 21-10 win in Nanjing.

It was more disappointment for Sindhu, who has suffered a string of near-misses in recent times.

“It is very frustrating to loss again. Last time also I had played the finals. It is quite sad and I have to come back stronger and get back to the sessions and prepare for the next tournament,” said Sindhu, who suffered her fourth final loss this season.

“Sometimes it is not your day, ups and downs will always be there and you have to always be stronger.

“A bit sad because I was expecting a good one but overall a good match and I am happy I came to the finals and winning and losing are parts of life and I have to take it as it is,” she added.

There was nothing between the pair coming into the final in Nanjing — in their 12 previous encounters they had won six each.

And so it was in the first game too, as the rivals went toe-to-toe, the more attacking Marin, the seventh seed, bellowing after each winning point.

Third seed Sindhu, 23, well known for her never-say-die spirit, initially edged ahead before Marin dragged her back to 16-16.

It was too close to call and the chair umpire had a job on his hands as the two foes repeatedly tried to throw one another off on Marin’s serve — the Spaniard wanting to get on with the game quickly but Sindhu refusing to let her in an attempt to kill the momentum.

Sindhu hit into the net to allow Marin to capture the first game in 27 minutes and she took that momentum into the second to make history.

“I can’t express my emotions. I have so many emotions inside me. I have been waiting for this moment long time. I am happy I could believe in myself this week,” Marin said.

As well as disappointment at Rio 2016, Sindhu was beaten in last year’s World Championships final by Japan’s Nozomi Okuhara and had to settle for silver at this year’s Commonwealth Games too.

Momota’s nascent career descended into controversy in 2016 when Japanese badminton chiefs suspended him for more than a year for visiting an illegal casino, denying him a place at the Rio Olympics.

Momota, number two in the world at the time, has been working his way back to the top ever since and the world-ranked seven is currently in the form of his life.