The 21-year-old weightlifter from Delhi lifted a total of 295 kgs to win the medal. 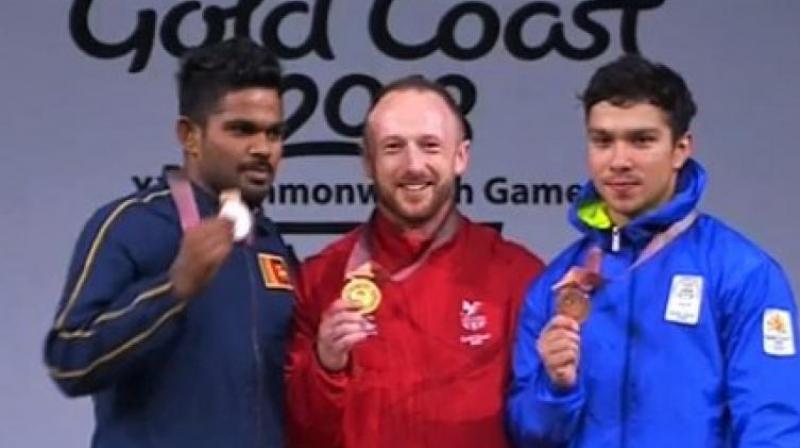 Deepak Lather lifted 136kgs in snatch and 159 kgs in clean and jerk to finish third in the standings. (Photo: Twitter / IOA)

Gold Coast: Riding on some luck and loads of exuberance,teenager Deepak Lather today became the youngest Indian weightlifter to claim a Commonwealth Games medal, picking up the bronze in the men's 69kg category here today.

"I was just sitting inside and hoping he would fail his attempt. I know it's bad to wish ill for someone but I couldn't help it," Lather said breaking into laughter after the medal ceremony.

"I was just hoping he would drop the bar, luckily he did. he had beaten me in the Commonwealth championships, I had got a bronze there after losing by just a kilogram to him. I don't know why he went for 175kg in his final lift, maybe he wanted gold," he added.

The youngster, competing in his maiden Commonwealth Games, holds the distinction of being the youngest to hold the national record as well. He held the 62kg category national record at the tender age of 15.

"It was very tough today and I think I was lucky to get a medal. I will try to improve upon the mistakes I have made. There are some technical faults I need to improve," he said referring to his clean and jerk technique.

Trained at the Army Sports Institute as a diver before being pushed into weightlifting by the coaches there, Lather quipped, "the coaches told me diving is not for rigid bodies of Haryana. We are meant for tough stuff like wrestling, weightlifting" "I actually did not like weightlifting when I started, but I am so happy today.

It is just amazing," he added. A bright smile on his face despite the trouble his exhausted knee was giving him, Lather acknowledged the tough competition he faced today.

"I have competed in the youth commonwealth games in 2015, that was better. This was very tough," he quipped. Lather is expecting the competition to go a notch higher in the Asian Games scheduled in August-September this year.

As for celebrating the current moment, Lather said he would hold that till the 2020 Olympics. "I have not spoken to my father for the last three months. Actually I don't even keep a phone, I have realised it's a distraction, can anyone lend me a phone to speak to him?" he asked during the media interaction.

"I won' celebrate right now, I will celebrate once I get an Olympic medal in 2020," he signed off. Earlier, Mirabai Chanu (48kg) and sanjita Chanu (53kg) won gold medals in the women's competition and P Gururaja claimed a silver in the men's 56kg category. The Indian weightlifters have so far claimed four medals in the event.