The Cavaliers produced nine three-pointers as they seized control in the third quarter. 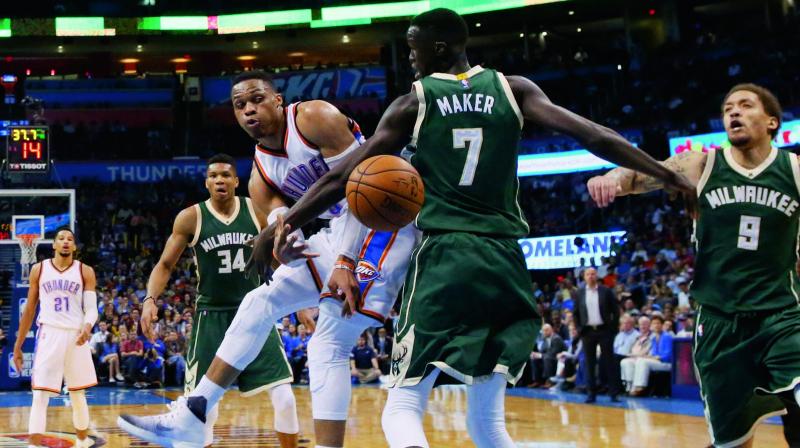 Los Angeles: Russell Westbrook tied Oscar Robertson’s record for most triple-doubles in an NBA season on Tuesday, his 41st triple-double of the campaign fuelling the Oklahoma City Thunder’s 110-79 victory over the Milwaukee Bucks.

Westbrook drained a three-pointer just before halftime to finish the first half with 12 points.

Minutes into the third period he notched his 10th rebound and within seconds had delivered a 10th assist on Taj Gibson’s basket that put the Thunder up 67-42.

Fans in Oklahoma City went wild, and chants of “M-V-P! M-V-P!” rang out for Westbrook, who raised an arm in acknowledgement as the feat was recognised by the arena announcer when play was stopped.

“It’s something I could never have dreams of growing up,” said Westbrook, who can break the record Robertson set in the 1961-62 season on Wednesday night against the Grizzlies in Memphis.

“To be able to be on this stage with this group of guys, it’s unbelievable and a blessing.”

Westbrook finished the game with 12 points, 13 rebounds and 13 assists and the playoff-bound Thunder snapped a two-game skid.

Westbrook’s 41 triple-doubles this season are more than 10 NBA teams have amassed in their club histories.

Cavs see through the Magic
Cavaliers great LeBron James took his career tally of triple-doubles to 54 on Tuesday with his 12th of the season, scoring 18 points with 11 rebounds and 11 assists in Cleveland’s 122-102 victory over the Orlando Magic.

The reigning champion Cavs limbered up for a Wednesday duel with the Boston Celtics for the Eastern Conference lead. Their victory pulled them level with the Celtics atop the East.

Cleveland, coming off a double-overtime home victory over the Indiana Pacers on Sunday, got off to a slow start and trailed 55-53 at halftime.

The Cavaliers produced nine three-pointers as they seized control in the third quarter.

Kevin Love led Cleveland with 28 points and 11 rebounds. Kyrie Irving added 24 points and Smith scored 19. Kyle Korver, back in action after a four-game absence with a left foot injury, scored 11 off the bench.

Klay Thompson poured in 41 points for the Warriors, who won their 12th straight game.

Stephen Curry drained three three-pointers on his way to 19 points and handed out a game-high nine assists.

The Spurs and Grizzlies were tied 86-86 with 2:15 to play in overtime before Pau Gasol and Patty Mills nailed three-pointers on back-to-back possessions to give Spurs the advantage.

Kawhi Leonard made three free throws in the final minute to seal it, finishing with 32 points and 12 rebounds.

Elsewhere in the West, the Portland Trail Blazers were left clinging to a half-game lead over the Denver Nuggets for the eighth and final playoff seed after they were dominated 106-87 by the Utah Jazz.

The Nuggets pulled off a crucial 134-131 victory in New Orleans that eliminated the Pelicans from playoff contention.

The Brooklyn Nets posted a third straight win, 141-118 over the Philadelphia 76ers.