Kings dominated the first quarter of the match and they went into the break with a lead of 39-29. 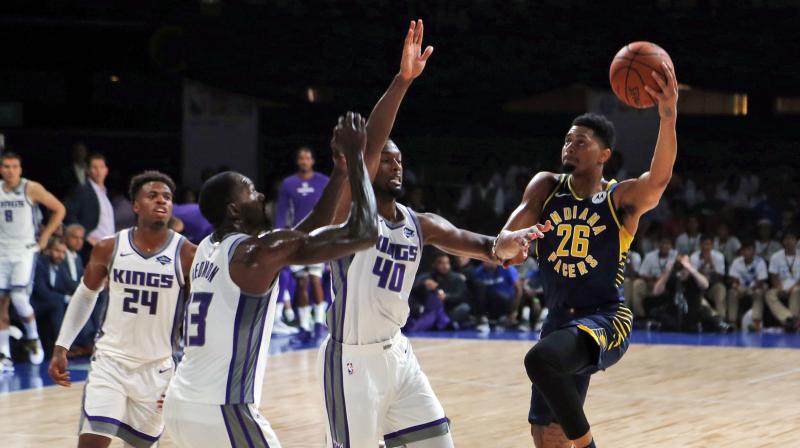 In the extra time, Pacers scored more points and as a result, they ended up winning the match. (Photo: AP)

Mumbai: In the first-ever NBA match in India, Indiana Pacers defeated Sacramento Kings 132-131 on Friday at the Dome, NSCI, SVP Stadium in Mumbai.

These games are a part of both the team's pre-season matches. These two sides will face each other once again tomorrow.

Kings dominated the first quarter of the match and they went into the break with a lead of 39-29.

The team was able to maintain their lead in the second quarter and after the conclusion of the half, Kings had 72 points to their credit as compared to Pacers' 59.

In the third quarter, Pacers changed the outlook of the match as they scored three-pointers and two-pointers to reduce Kings' lead to just one point. However, Kings came back into the match and they finished the third quarter with a lead of five points. The quarter finished with the scoreline at 97-92 in favour of the Kings.

In the fourth quarter, Pacers equaled the Pacers score and with the scoreline at 118-118, the match had to be played in extra time.

In the extra time, Pacers scored more points and as a result, they ended up winning the match.

This was the first time that teams from a North American sports league played in India.

Before this match, the Kings (7) and Pacers (7) played a combined of 14 NBA matches outside North America.

Nita Ambani, the chairperson of Reliance Foundation, presented the ceremonial 'Match Ball' to NBA officials ahead of the game between Kings and Pacers.

The match ball handover was a mark of welcoming the sport to India.

Youtube sensation Bhuvan Bam sang the National Anthem of India at the event.

Mumbai's underground rapper Kaam Bhaari also performed in the arena ahead of the match.

It was in May 2017 that The NBA Academy opened up in New Delhi. It features a basketball training center and looks to train top players throughout India.

The NBA tournament caught the nation's attention when during the 'Howdy Modi' event at Houston, US President Donald Trump hinted that he might visit India to witness India's first NBA game.

Trump while addressing the 'Howdy Modi!' event said, "Very soon India will have to access another world-class American product - NBA basketball. Wow, sounds good. Next week thousands in Mumbai will watch the first-ever NBA game in India..am I invited, Mr Prime Minister? I may come, be careful I may come."

National Basketball Association (NBA) India on September 12 had announced that the first-ever NBA game in the country will be organised in October in Mumbai.

Trump made the remarks at NRG Stadium which had hosted the first of its kind event in honour of Modi, who was on a week-long official trip to the United States to address the UN General Assembly, amongst other official engagements.