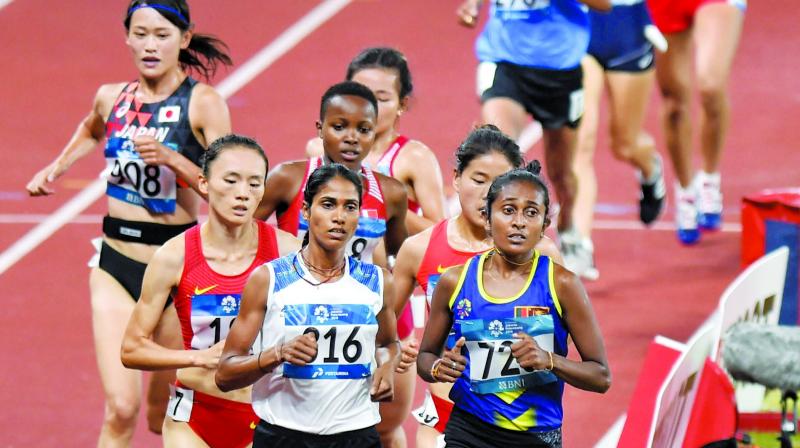 Sudha Singh came from Uttar Pradesh to Mumbai in 2005 as Railways employee and it gave her career a defining direction. She was competing in 5000m but due to tough competition in Maharashtra in that event she was advised 3000m women’s steeplechase which was relatively fresh event at that time.

“In 2005 when I joined Central Railways, I was running 5000m. But with Kavita Raut and many other athletes in Maharashtra doing well there was hardly any event left for me. I was advised to compete in steeplechase which was relatively new at that time. During a Railway meet I tried jumps over water and it was tough initially. I had 12.10 timing first time and I bettered it later to 10.56 and went on to create national record in 2007,” she recalled.

International success followed and she won gold for India at the Guangzhou Asian Games in 2010 and was awarded the prestigious Arjuna award in 2012. Injuries came to haunt her and she faced many ups and downs but she kept jumping over the hurdles.

In the 2012 London Olympics, after she broke her own 3000m steeplechase national record with a timing of 9:47.70 seconds, Sudha had a 13th place finish in the heat and did not qualify for the finals. She came fourth in the 2014 Asian Games behind her competitor from Maharashtra Lalita Babar. It was a photo finish and she thought of quitting after undesirable result despite putting in so much of hard work.

“I lost medal by micro seconds after putting in same hard work. I left the camp and was disturbed. I gave steeplechase a break and started training for marathon and ran in Mumbai Marathon 2015. It was my first 42km race and I thought I can give up anytime after 35 km but I managed to go whole distance. The timing I thought would be over three hours as I had done just two months of training but it was enough (below 2.42) to qualify for World Championships in China. I earned 19th place in China with timing of 2.35.35 to qualify for Rio Olympics,” she said.

Sudha remained unlucky in the 2016 Olympics too when she fell ill after competing and returned to India. Later she was diagnosed with swine flu and was ruled out from competing for the rest of the season. Satara girl Lalita went on to reclaim national record by running 9:19.76 to qualify for finals in 3000m steeple chase. Sudha (9:26.55) had earlier broken Lalita’s previous record of 9:27.86.

Sudha decided to continue steeplechase along with marathon on the advise of Athletics Federation of India due to her success rate. “After training for marathon it is easy to train for steeple chase. One month time is enough,” she said.

She won gold at the 2017 Asian Championship in Bhubaneswar. However, the 32-year-old couldn’t qualify for the GoldCoast Commonwealth Games in April and was not an automatic choice for the Asian Games.

“I missed CWG qualification as I had ran in Mumbai Marathon in January. The qualification cut off date was March 7 but I couldn’t recover in time to practice. I was determined to win gold at Asian Games but silver at the age of 32 is as good as gold,” she said.

Like a true competitor she doesn’t care about African athletes running for Asian countries, even though it robbed her a chance of finishing on top of the podium. Kenyan born Winfred Yavi won the gold for Bahrain with timing of 9:36.52. Sudha clocked her second best timing of 9:40.03 seconds to win silver.

“Yes we could have won many more gold medals but anyhow we are going to face African athletes in World Championships and Olympics. So it enhances competition in Asian Games,” she added.

She now wants to create national record in marathon but knows well Mumbai won’t be ideal course to do it.

“I want to create national record in marathon but in (humid) Mumbai with 7 am start and up-down route it will be tough. I am looking to participate in cooler region around February,” she signed off.