East or West Anthony is best

For 19-year-old Hada — the team’s solo entry in the premier class — Chennai was a sweet start. 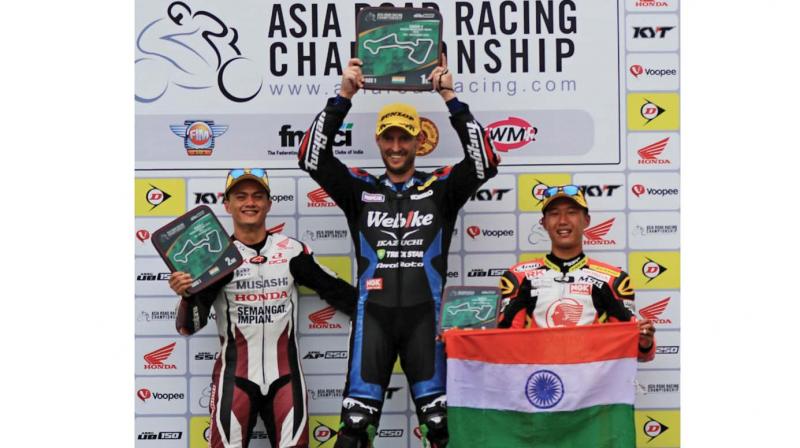 Anthony West (centre), winner of the SuperSport 600 race, is flanked by second-placed Md Zaqhwan Zaidi (left) and Taiga Hada at the FIM Asia Road Racing Championship at the MMRT in Chennai on Saturday.

Chennai: Australia’s Anthony West of Team Webike Ikazuchi claimed the top spot in SuperSport 600 category’s Race 1 with a sublime display of controlled aggression at the FIM Asia Road Racing Championship’s fourth round, on a rain affected day of action here on Saturday.

It was the Australian’s third victory this season in the premier bike category, which came under tricky conditions due to slippery conditions, which consolidated his top position on the leaderboard.

While three of the first five scheduled races on the day (Underbone 150, Asia Production 250 and SS600) went off smoothly, heavy showers forced the last two races (Honda CBR250 and TVS RR310) to be postponed.

For 19-year-old Hada — the team’s solo entry in the premier class — Chennai was a sweet start. Hada qualified sixth in the grid with the fastest lap time of 01.41.384. Hada made a strong start in race 1 and was soon in the lead with West and his play-off keeping all on toes right till the finish. Hada eventually finished third.

While there was a close contest among the podium finishers in the SS600 category, with the top three riders overtaking each other several times throughout the 16-lap race, Race 1 of the AP250 race was dominated by Indonesian racers. Team Astra Honda took the top two spots, Reza Danica Ahrens (21:53.4) notching up his fifth consecutive success, Mario Suryo Aji (21.53.5) was second and Reynaldo Ratukore of team Onexox TKKR was third (22:01.9) in the 12 lap race.