“It was difficult to adapt to London at first but when you’re aged eight, you somehow find a way,” Farah told the Big Issue, the weekly magazine. 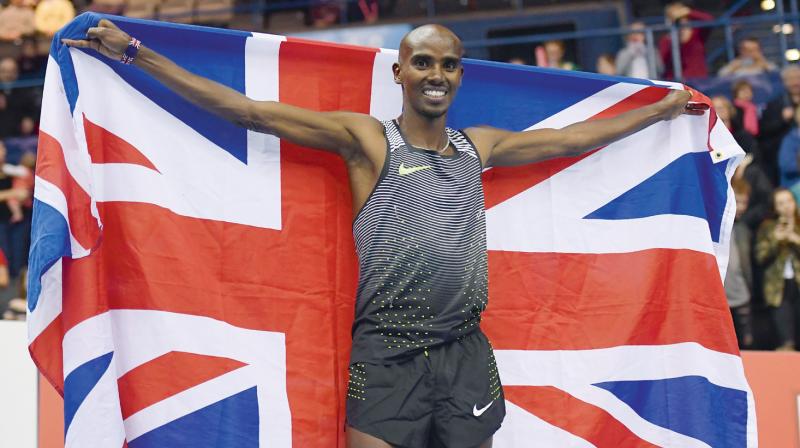 London: Mo Farah will like another athletics superstar Usain Bolt bring the curtain down on his track career at the world championships with he hopes a final double golden flourish.

The 34-year-old Somalia-born Briton — who will switch his focus to road running — can capture his 10th successive world or Olympic title in the 10,000 metres on Friday.

Then he hopes to bow out in style on the track in London where he achieved his first Olympic double in 2012 with the 5,000m on Saturday week.

That will bring to an end a six year spell where like Bolt in the sprints Farah has dominated.

He broke up the previous hegemony of the Kenyans and Ethiopians, lifting his exploits up above those of legends such as Paavo Nurmi, Lasse Viren, Emil Zatopek, Haile Gebrselassie and Kenenisa Bekele.

However whilst many question how will the sport cope without Bolt and his engaging showmanship — lightning bolt and all — perhaps unfairly the same has not been said about the vacuum that Farah will leave in his wake.

Only once, in 2011, has he reached the top three in the popular vote for the prestigious BBC Sports Personality of the Year poll.

It prompted British triathlon star Alistair Brownlee to decry the glaring omission for an athlete whose exploits were recognised by Queen Elizabeth II who bestowed a knighthood on him.

“It’s really sad, because for me he is the perfect British story,” Brownlee told the Guardian in December last year after Farah finished only fourth in the poll.

“It’s what we should be about: a person who comes to Britain as a young man, as a refugee, and an ex?schoolteacher (Alan Watkinson) identifies something that he’s brilliant at and he represents Britain as the best in the world.

Whilst Brownlee put it down to Farah perhaps not being considered British — he came from war-torn Somalia via Djibouti with his mother (Amran) and two of his five siblings aged eight to England to join their father Muktar — doping claims made about his US-based coach Alberto Salazar, since proved to be false, may have had an impact.

Farah, though, is used to adversity having been separated from his twin brother Hassan for 12 years until he returned to Somalia for the latter’s wedding.

Farah, who was forthright with regard to US President Donald Trump’s remarks about Muslims last year when he was a candidate describing them as “blasphemy”, also had to put up with racist comments at his London school.

“It was difficult to adapt to London at first but when you’re aged eight, you somehow find a way,” Farah told the Big Issue, the weekly magazine.

“You make friends. I was always quite accepted, I think because I never saw myself as different to anyone else, a different colour. I had white friends, black friends. I was easy going. The occasional comment, I just chose not to hear it.”