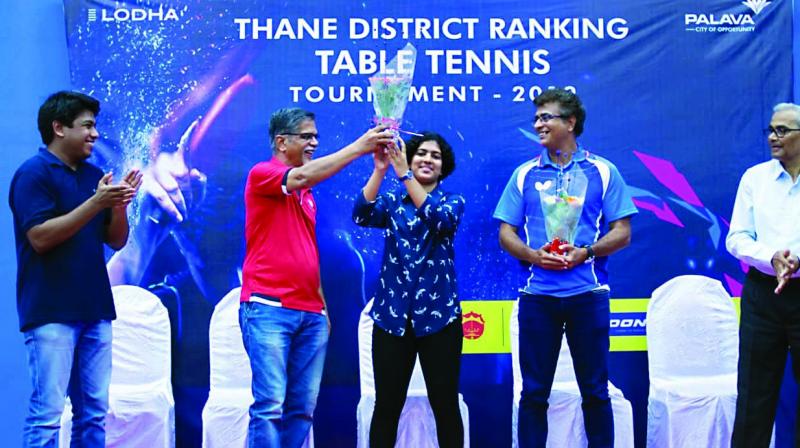 Sandeep who is the father and coach of Swastika Ghosh, recalls how he put off football studs and job offers to make his daughter champion material in TT.

Navi Mumbai girl Swastika Ghosh just turned sweet 16 last month, but she has already made her doting father, Sandeep, a proud man. The talented paddler has won many medals at the cadet, sub junior and junior categories at international, national and state level competitions.

She won a silver medal in the UTT National Ranking Table Tennis Championships (North Zone) at the DPS Hall in Sonipat, on Monday. That performance came directly after gruelling training camps and tournaments in Taiwan and China. Plus, the Asian table Tennis Union (ATTU) recently selected her for another  Table Tennis training camp at China, starting from July 31.

“I was in Taiwan for a five day training camp and before that we played in China where we won a team bronze medal. Prior to that, there was a preparatory camp for the tournament in China. I came directly from overseas to Sonipat for the tournament and had problems in adjustment. But I am happy with my overall performance,” said Swastika, who was felicitated by Palava at the Thane District Ranking Table Tennis Tournament that concluded on Wednesday evening.

Her father, who is also Swastika’s coach, was overwhelmed to be recognised as her coach by the hosts of the tournament. “It is a rarity to give respect to coaches, so it was a pleasant surprise,” he said.

He revealed his Dangal movie type story about how he sacrificed his job and gave up his first love, football, to take up TT coaching.

“I played as a striker back in Kolkata, but when I shifted to Mumbai in 1991, my Mill company played me as a midfielder. I played in Rovers Cup also. However an injury halted my career. After I recovered, I started playing indoor sports as there were no open spaces to play in Kharghar. Swastika also started playing TT and later I did Level 2 course in TT coaching and started an academy in Kharghar,” said Sandeep who also worked as a Physical Education Teacher after doing MPED and is knowledgeable about many sports besides TT.

The turning point came when Swastika won the national cadet tournament at the age of nine. Sandeep knew his daughter can go far and so, he decided to give more time to her. “I gave up football, turned down an offer to be head of a department, though it had a good pay package, just to give more time to my daughter as she missed her practice sessions. I needed to accompany her everywhere. When I saw Dangal, I related to it,” he recollected.

The results started showing immediately as Swastika’s talent came to the fore. “She, at nine, was the youngest higher ranked cadet, and also became the youngest in the Under-15 category. Currently, she has World Junior No 19 junior ranking and is second in India,” said the proud father.

Without a job, it was difficult to support his daughter with her annual expenses working out to 7-8 lakhs, but he managed somehow until the Virat Kohli Foundation started backing her two years ago. “It was difficult to manage expenses of her tours and travels but I was somehow doing it. However, now Virat Kohli Foundation is taking care of her expenses for tournaments and camps and she can go abroad easily and get great exposure like what happened in Taiwan recently,” he said.

Sandeep is targeting an Olympic medal for his daughter which India hasn’t been able to achieve yet. “She will now go to China and Hong Kong for camps and tournaments. She is preparing for the Asian Junior Championship in Mongolia, slated for September. Our ultimate aim is to win an Olympic medal,” he said. Swatistika, who trains at Ramsheth Thakur Public School TT hall, when at home opted for  higher age group Girls Singles events, so as to face tougher competition at the state and national level. She has been a regular member of Team India in International tournaments. Swastika represented the country in ITTF Belgium, Portugal and Spanish open and was also the captain of the Indian Sub Junior Team for South Asian Federation Games.