The tied second finish was the best PGA Tour result for Anirban Lahiri. 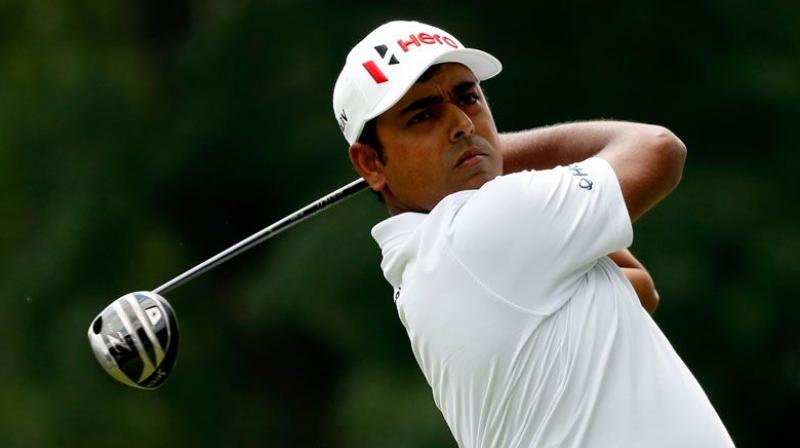 The 29-year-old Anirban Lahiri, who came into the week following a streak of three missed cuts and a ranking that was fast dropping, had the best card for the day as he rose from overnight tied 27 to finish at 10-under 272.(Photo: AFP)

Dublin: India's Anirban Lahiri shot one of the best rounds of his fledgling PGA Tour career with a bogey free seven-under 65 to finish a brilliant second at the Memorial golf tournament, here.

After shooting one of his best rounds, Lahiri then waited for over three hours to see whether his clubhouse target of 10-under would hold out for one of the most stunning wins this season.

In the end, Lahiri finished tied-second, as Jason Dufner found a second wind on the back nine and won by three.

The 29-year-old Lahiri, who came into the week following a streak of three missed cuts and a ranking that was fast dropping, had the best card for the day as he rose from overnight tied 27 to finish at 10-under 272.

It was a score that stayed as the clubhouse target as the players grappled with a weather delay and a golf course that became demanding before the rain softened it late in the day.

Dufner, who had a record 36-hole score of 14-under before plummeting to five-over 77 on the third, turned in nine-under after three birdies and three bogeys on front nine.

Dufner steadied himself on the back stretch with birdies on 10th (which brought him level with Lahiri) and then moved ahead with further birdies on 12th, 15th and 18th to cruise to a three-shot lead over the Indian and Rickie Fowler, whose

bogeys on 14th and 18th saw him drop down down from a challenging 12-under to 10-under.

Justin Thomas (72), who pushed Lahiri behind to win the CIMB Classic last October, was fourth with Matt Kuchar (73) at nine-under.

Around the time Lahiri was finishing, Jack Nicklaus, the tournament host was in the commentary box, and said, "He (Lahiri) is a very fine young man and plays well. He is a member at the Bears Club."

Lahiri is a member at Nicklaus Bears Club, close to his place in Florida.

"It feels great to have my best at Mr Nicklaus' event. He has been very kind to Ipsa and me ever since we met him. Being a member at the Bears and having the opportunity to speak to him and get his advice is really special," Lahiri said.

The result which was worth USD 765,600, his best ever in his career, also sealed his 2018 PGA Tour card, as also cemented his place for the season-ending FedEx Cup play-offs.

But Lahiri will probably miss out on the US Open as his finish will only move him from 90th in world ranking to 64- 65th and top 60 are assured a berth in the year's second Major.

He will however make significant gains in the President's Cup standings and move up from 22nd to around 15th, as top 10 are assured of automatic berth and two more come through Captain's pick.

For Dufner, the 2013 PGA Championships winner, it was his fifth PGA title, but the first since Career Builder Challenge in January 2016.

For Dufner, 65th in world rankings at the start of the week, it means a passage to US Open and also almost a sure selection into President's Cup team.

"I would have liked may be four or five holes more, actually. Because I was playing really good. And I could have probably made a couple more birdies. But like I say, I'm really happy with the way I played. I felt really relaxed out

there. I am disappointed, actually, not to have birdied 15, 16. I hit a couple of shots that came really close to being very good. But then that's the Memorial for you. You take what you get and then you stay happy with that," said an elated Lahiri.

On whether he had any thoughts of winning or coming close before the start of the final round, Lahiri laughed and said, "Last night at dinner, I was joking that I had to do a 'Noren' to have any chance."

At the BMW PGA last week in Europe, Swede Alex Noren came out of nowhere and shot 62 to win the title ahead of numerous leaders.

Then Lahiri added, "No, honestly I was trying to have some fun. Just wanted to get some momentum going. That's all."

Lahiri starting the day at three-under and tied 27th place, birdied second, fourth, seventh and ninth to turn in four-under.

As he added birdies on 11th and 14th, he was zooming up the leaderboard. He hit a great drive on Par-5 15th and his second shot just went into the rough on the right side of the green.

Another 3-4 yards and he would have had a eagle putt from 10-15 feet. Lahiri had a tough lie, but managed a par and then missed another birdie putt on 16th.

He birdied 17th and then his tee shot on 18th went into the right rough, from where he did well for a closing par and kept his card clean at 65.

Lahiri is not playing the US Open Qualifying next week and will just see whether he gets into the Major any other way, else he will be back in action after two weeks at the Travellers' Championship.