Sindhu and Saina's mentor and current chief national coach P Gopichand was the last Indian to win the championship back in 2001. 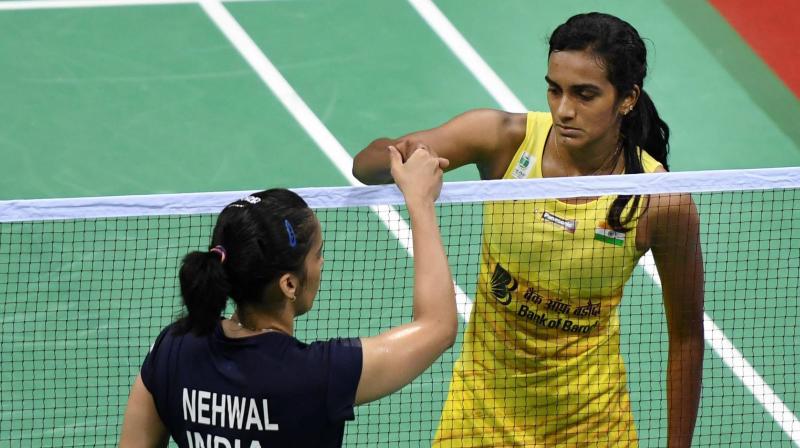 Birmingham: A challenging draw stands in the way but India's top shuttlers PV Sindhu and Saina Nehwal will nonetheless fancy their chances of ending a nearly two-decade old title jinx at the All England Championship starting on Wednesday.

It was Sindhu and Saina's mentor and current chief national coach P Gopichand, who was the last Indian to win the championship back in 2001.

Only the top 32 in the Badminton World Federation (BWF) rankings qualify for the tournament and out of them, only three Indians have been seeded -- the third being Kidambi Srikanth (seeded seventh) in the men's event.

Fifth-seeded Olympic and world championship silver-medallist Sindhu will square off against former world no 2 Sung Ji Hyun of South Korea at the USD one million event.

The star shuttlers have had contrasting results against their first-round opponents.

While Saina enjoys a 6-0 overall record against Gilmour, Sindhu has been troubled by Sung Ji but leads 8-6 in their previous 14 encounters.

Sung Ji defeated Sindhu twice in three meetings last year and if the Indian can put it past the Korean, she will run into either Russian Evgeniya Kosetskaya or Hong Kong's Cheung Ngan Yi in the second round.

A favourable result will then pit Sindhu against third-seeded Chinese youngster, Chen Yufei in the quarterfinals.

The Indian had lost to Chen at the 2018 China Open and will be wary of the Chinese despite enjoying a 4-3 head-to-head record.

"Each round will be comparatively tough. Each point is important to me. I am playing Sung Ji Hyun in the first round and it would be important for me to focus from the first round," said the 23-year-old, who had reached the semifinals in the last edition.

While Sindhu has been in red-hot form last season, claiming silver medals at all major events, former world no. 1 Saina remains the only Indian to come close to winning the prestigious title, finishing runners-up in 2015.

The seasoned Hyderabadi enjoyed a good start to the year, winning the title at the Indonesia Masters in January and getting the better of Sindhu in the national finals to claim the crown.

Saina, who turns 29 on March 17, will face either Denmark's Line Hojmark Kjaersfeldt or China's Cai Yanyan if she happens to win the first round.

While Saina has an edge over the Dane, she has never faced the 19-year-old Chinese player before.

The vastly experienced Indian is expected to cross at least the second round and is likely to face her nemesis Tai Tzu Ying, against whom she has lost 12 consecutive times.

The Chinese Taipei shuttler enjoys an overall head-to-head record of 14-5 against Saina.

In the men's event, Srikanth will take on Frenchman Brice Leverdez in the opening round while an in-form Sameer Verma will start against former world champion and world no.1 Viktor Axelsen of Denmark.

After a poor 2018, Srikanth had a decent outing in Malaysia and Indonesia, reaching the quarterfinals. He would look to find his best form during the week.

Sameer, who had reached the knockout stage of the World Tour Finals, will be playing his first BWF event of the season.

Among others, B Sai Praneeth and HS Prannoy will face each other in the opening round.

While Praneeth would be hungry to put his Senior Nationals' disappointment behind him, Prannoy has been battling with a breathing problem triggered by a Gastro-Esophageal Reflux Disorder (GERD). He would be eager to put on a good show before leaving for his medical treatment in the US.

Chief coach Gopichand has already pinned his hopes on Saina, Sindhu and Srikanth. He feels the trio has what it takes to end the country's 18-year wait for the prestigious trophy.

"We have had good performances from Saina, Sindhu and Srikanth has also been in good form. I do expect that we will have a good performance at this year's All-England," Gopichand had said last month.

Three-time world champion Carolina Marin, who is undergoing physiotherapy after rupturing the Anterior Cruciate Ligament (ACL) in her right knee during the Indonesia Masters final, will be also among the ones to watch out for in the singles' draw.

In men's doubles, former National champion Manu Attri and B Sumeeth Reddy will face China's Ou Xuanyi and Ren Xiangyu in the first round.