India will play a total of eight home games with six matches in January and February and two games in May. 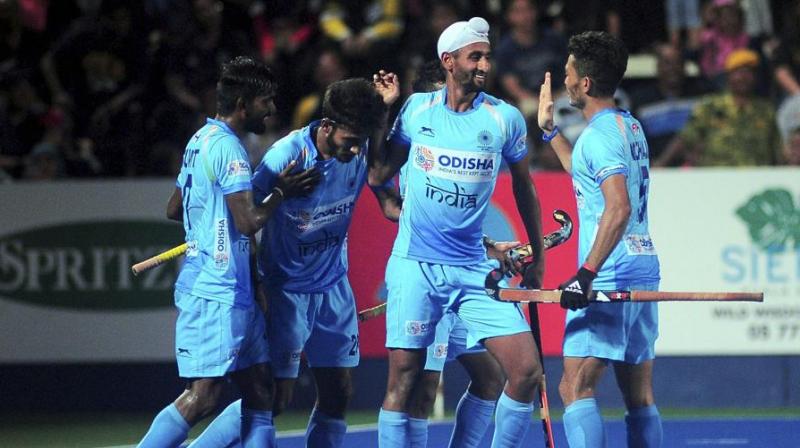 The Indian men's hockey team will open its campaign in the FIH Pro League against the Netherlands at home in January next year. (Photo: PTI)

New Delhi: The Indian men's hockey team will open its campaign in the FIH Pro League against the Netherlands at home in January next year.

According to the schedule of the FIH Pro League season 2 released on Wednesday, India, who pulled out of the inaugural edition of the tournament, will play the Dutch side on January 18 and 19 next year.

India will then host world champions Belgium on February 8 and 9 followed by two more home fixtures against Australia on February 22 and 23.

The Indian team will then leave for the away games in Germany (April 25 and 26) and Great Britain (May 2 and 3).

India will return to play on home soil on May 23 and 24 against New Zealand before travelling to Argentina to play on June 5 and 6.

India will play the last leg of the Pro League round-robin matches in Spain on June 13 and 14.

India will play a total of eight home games with six matches in January and February and two games in May.

"We are really excited to begin our first FIH Pro League campaign on home soil in January. The league provides a great opportunity to play against top teams in the world and we expect all the matches to be challenging," he said.

"I am sure playing continuous top-level matches will be beneficial in the all-important Olympic year and this could also mean good match exposure for all players in the core group," added Manpreet.

"With India playing the home leg against top teams like the Netherlands, Belgium and Australia, I am sure hockey fans in India will get to watch the very best of hockey. India has always enjoyed playing these teams on home soil."

India's chief coach Graham Reid emphasised on the importance of regular exposures against top teams ahead of the Tokyo Olympics.

"We are very excited about the prospects of playing in the Pro League next year. Having experienced it first-hand, I know how important it is to have regular competition.

"To play against the best teams in the world and test the depth of this talented young squad will be ideal preparation for the Tokyo Olympics should we qualify in November," he said.