With blazing performances on the track & field, the athletic contingent won 7 of India’s 15 golds. 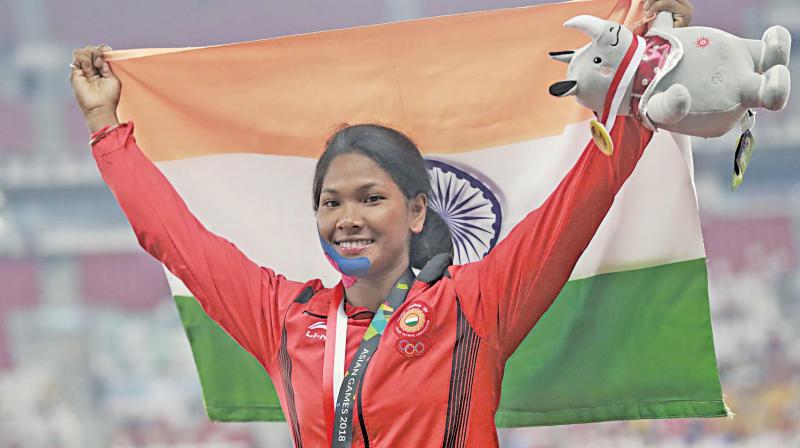 When the Indian men's hockey campaign ended with a 2-2 (6-7) loss to Malaysia in the semi-final at the Asian Games, sports enthusiasts were taking the time to figure out what happened to the team. Captain and goalkeeper Sreejith told the reporters that he takes full responsibility. The same was the case with the Kabaddi team. The Indian national Kabaddi side is by far the most successful one and it failed miserably in both men's and women's categories. Iran who mauled India ended gold medalists in both divisions. But despite the unexpected downfalls in medal-expected events, with a gold medal in the Men's Light Fly (49kg) category in boxing, Amit Panghal took India's medal tally at the 18th Asian Games to 66.

India's dream of becoming a superpower in sports is still on, say experts after our run in Asiad. Though we are way behind the likes of China and Japan, individually, we have seen a lot of talents this year's event. With Neeraj Chopra's gold in the Javelin throw, making him the first Indian to bag gold in Javelin, India showed signs of winning unexpected events.

Jinson Johnson, a Kerala athlete, won gold in the 1500-meter sprint, which is the first for any Indian. His silver in 800-meter spurred him to the 1500-meter Asiad gold. Though it was a surprising gold, former athlete Dr Sakeer Hussain V.P. says more than Jinson winning the medal, what was surprising is India showing great improvements in athletics.

“Athletics has been an Achilles heel for us throughout the history of international events. We had great runners like P.T. Usha in the past, but the number of medals this term proves we are going in the right direction,” says Dr Hussain, who is also the Director, DPE (Department of Physical Education), University of Calicut. But according to him, the medal tally could have improved if we had a special sports policy in our country.

“I am not just talking about athletics, when you look at the Indian athletes participating in the event, the body language is different from other countries. We are physically a big threat to others, but we fail to capitalise on it. We still lack a methodical preparation. By recruiting foreign coaches and trainers for our athletes, they have changed the dynamics, but our country still has no proper policy for sports players and athletes. We do have talent, but not enough facilities,” he says.

He also says it's not correct to complain that India is still dominated by cricket. “That won't work anymore. Professional sports like badminton and tennis are growing so fast that India has become a powerhouse. But our athletic culture needs to be advanced and we still have room for improvement,” he adds.

Dutee Chand's silvers each in 100 and 200 metres are the first since P.T. Usha won two medals in the same edition back in 1986.

The 22-year-old Dutee, a sprinter from Odisha, rose like a phoenix from the ashes, clinching a silver medal each in the women's 100m and 200m in her first Asian Games. She was not allowed to participate in the 2014 edition while serving a ban under the hyperandrogenism policy of the IAAF (International Athletics Federation). During her post-medal ceremony time with reporters, she spoke about how she was alienated and the after-effects of her ban continue to traumatise her.

Manjit Singh (1:46.15) ended a 36-year-wait for gold in the men's 800 metres and the team of Hima Das, M.R. Poovamma, Saritaben Gayakwad and Vismaya Velluva Koroth won the relay; these are other great feats.  According to the former athlete and coach Raju Paul, who is the master trainer responsible for many young talents that dominate Kerala's tracks, after the event the authorities should not forget about the athletes. “The amount of appreciation and facilities we give our athletes are well-known compared to other countries. It is a huge surprise that our athletes actually saved India in the Asian Games, whereas other games failed to produce anything big. This is unlike our tradition. Usually, we do well in other games. Our approach to athletes before and after the success should be changed,” he says.

Athletes from Kerala, were made even more proud of their achievement as they had to leave their families behind during the floods to participate in the event with winners like Jinson, Muhammed Anas and Vismaya Velluva Koroth making the State proud. All in all, this edition of Asian Games has given new hope to young athletes.