Skipper Fazel Atrachali talks about the team’s win against the unbeaten Gujarat Fortunegiants in the last match of the home leg. 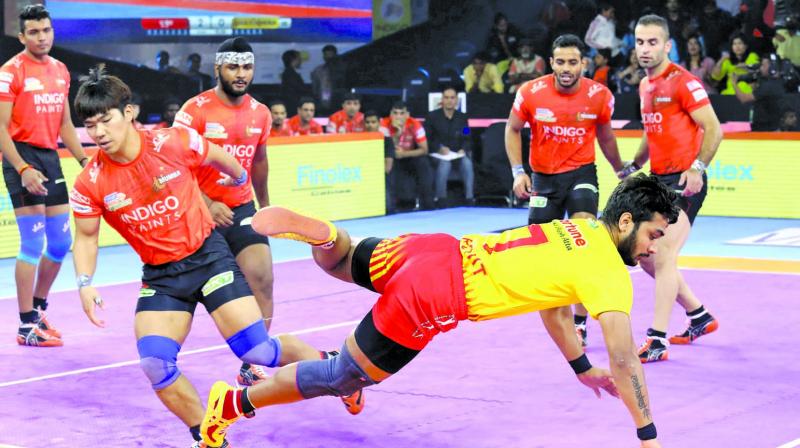 U Mumba have been unpredictable in season seven of the ProKabaddi League so far. After entering the home leg with a win, they started with a bang against Puneri Paltan in a Maharashtra derby clash. But two losses to Bengaluru Bulls and U.P. Yoddha derailed their campaign. They handed the first win of the season to U.P. Yoddha but regrouped in time to upset the unbeaten Gujarat Fortunegiants 32-20 in the final match of the Mumbai leg at the Dome, NSCI, SVP Stadium on Friday.

Surinder Singh was the hero for the home team, ending the match with a High five and four raid points. Abhishek Singh emerged the top raider again with five raid points.

The home side’s inconsistent defence came to the fore on Friday, inflicting two all outs on the Fortunegiants and leapfrogging to the first spot for the first time with 17 points after having played six games and won three.

“Both the teams’ defence was good. The main point was that whichever team got the All-Out first, that team would win. Whatever lead got accumulated was after the points collected after the first All-Out. If we had been All-Out first, then it would have been difficult for us,” U Mumba coach Sanjeev Kumar Balyan said in the post match press conference.

The coach admitted they relied heavily on defence as usual. “If our defence had leaked points, then we didn’t have much hope that our raiders would have got the points. So that’s what I told Sandeep Narwal and Fazel Atrachali, that whether it’s a bonus or a successful raid, if they get a point, then consider us lost. We couldn’t afford to give a point,” Balyan added.

U Mumba will now take rest before playing their next game against Bengal Warriors in Patna on Friday. Skipper Fazel Atrachali vowed that they will go to the next leg with more energy.

“Every match was important, but this match was more important because we are in the home leg and we lost two matches. We were unlucky in the last two matches, but we learned from them. Tonight was important because if we had lost three straight matches as a home team then it would have brought the confidence down. But we have bounced back. Now in the next match, we will go in  with more energy,” Atrachali told reporters.