The other creditable finish came from Chandigarh’s Aadil Bedi, the only amateur in the field on the final day. 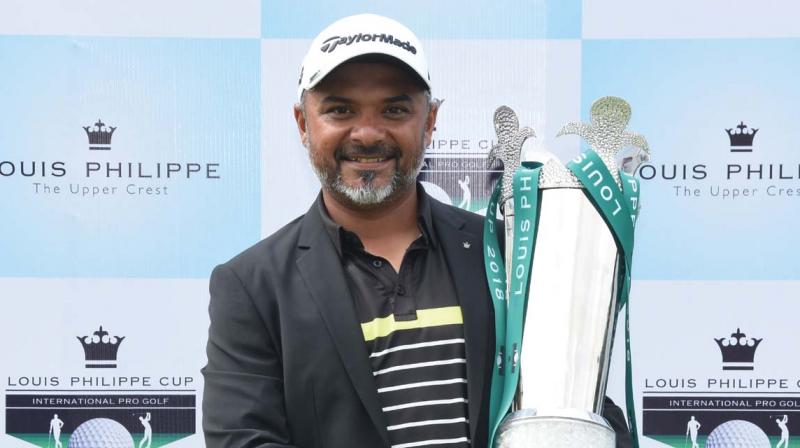 Rahil Gangjee poses with the winner’s trophy on Friday.

Bengaluru: In the end, it all came down to experience.

Rahil Gangjee drew on his years of experience and a deep understanding of the Prestige Golfshire Club, to shoot a stunning 7-under 63 on the final day of the Louis Philippe Cup here, to lift his second title of the year in style. Gangjee, with his 63, equalled the course record set by day one leaders Udayan Mane and Miguel Carballo for a total of 11-under 269 to win the Asian Development Tour and PGTI co-sanctioned event by three strokes.

Tied fifth after three days, Gangjee wasn’t really in the mix with Mane, Rashid Khan and Carballo dominating play on the opening three days, but the two-time Asian Tour winner knew he wasn’t far behind either.

All it needed was a spectacular round of golf and Friday was one such day when it all fell in place for the Kolkata golfer, who had earlier won the Panasonic Open in Japan this year.

“It felt normal today,” was how Gangjee described his spectacular win as fellow golfers greeted him with loud cheers when he sank a birdie on the final hole.

Overnight leader Rashid Khan was charging along but Gangjee had switched gears on the day. He carded eight birdies against a bogey leaving Rashid with a three-shot deficit on the final two holes, something the 27-year-old found hard to cover up.

“It was normal you could say,” Gangjee said after the win. Gangjee also collected six world-ranking points allotted to the winner.

Rashid (1-over) took the tied second spot along with Om Prakash Chouhan (66) with a total of 8-under 272. Three bogeys on the back nine did Rashid in after being in contention for most of the day.

“I tried my best but things didn’t turn around as planned. I had a good day but the 11th hole bogey was something that spoiled it a bit for me. The 13th thereafter was what I consider my turning point when I hit the water and ended up with a bogey on a par 5. I think I couldn’t recover post that,” said Rashid.

Overnight joint-leader Mane shot his first over par round of the competition for an overall 7-under 273 to finish tied fourth along with three-time Asian Tour winner, Australia’s Marcus Both. Local lad Khalin Joshi was a stroke behind in sole sixth to collect a cheque of $2775.

The other creditable finish came from Chandigarh’s Aadil Bedi, the only amateur in the field on the final day. The 17-year carded a solid 2-under 68 on the final day to finish in tied 14th spot with an overall score of 2-under 278.