Sanil’s rise from the shadows

The table tennis player talks about rising to the role of a leader to defend the UTT title and missing the Asian Games ticket. 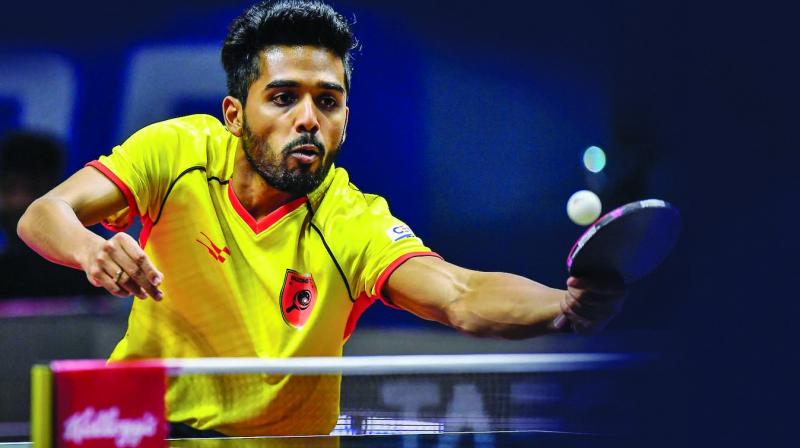 This season of the league was fruitful for Sanil.

The almost a month-long Ultimate Table Tennis (UTT) league, with uninterrupted games in four different cities, concluded on Sunday. The paddlers had a gruelling time shuttling around the country from one end to another and would be really foward to a break. But not Sanil Shetty, who returned to Mumbai with a runner-up medal.

His side suffered a crushing defeat in the final on Sunday. Manika Batra and Sathiyan Gnanshekharan from Dabang Smahsers wreaked havoc on Shetty’s team, Falcons TTC, to lift the title. Even after such a demanding rota, the Malad-based player did not waste a day to return to the table.

Sanil was on a flight on Monday to Mumbai. On Tuesday, when the city was reeling under heavy showers, he reached the Khar Gymkhana early in the morning to train for the North Zone Ranking Tournament that starts later this week. “A days rest was enough,” says the the driven 28-year-old paddler.

This season of the league was fruitful for Sanil. Not only in terms of results but in terms of the way he handled the pressure. Being a gold medal holder from the Gold Coast Commonwealth Games, his shoulders were burdened with responsibility to take his team forward. It was his time to rise as a leader because most of the times it has been someone else who has played the role of a senior player in his team.

The first-leg, which was held in Pune did not go as Sanil had imagined. He was playing the role of a senior in a Falcons team which was defending the title. “See, last year I had no stress because there was no pressure. But this year, it became tough because of the expectations. If you see, the first leg in Pune was not good for us. We were struggling,” he says.

After his side had won 11-10 against Maharashtra United, they suffered a humiliating 4-17 defeat against Smashers. The morale had gone down in the camp. The proceedings moved to Delhi and they needed some inspiration to bounce back. The defeat had put them on a low.

Shetty was up against world number 26, Aruna Quadri from franchise, Warriors TTC. He had a great challenge against someone who has faced superior opponents and got the better of them. It was Sanil’s time to rise as the leader and inspire his side. It was a 2-1 victory over the Nigerian for him. A not-so-animated Sanil was jubilant. “It is probably the greatest victory of my career,” he had said after the win.

“I realised that I should play freely. The team was in need of points and I had to do it,” he says.

A new accomplice
Apart from his individual brilliance, Sanil partnered with Romanian Bernadette Szocs in the mixed doubles games to cause immense damage to the opposition. The duo paired up seven times and emerged as winners in five of those games. The understanding advanced to a level where they are planning to play the pro tours jointly.

“Since the pro tours have recently introduced mixed doubles, Bernadette and I talked about playing together. I was comfortable with her as my partner and we can do well in the tour,” he says.

The bigger man
The Asian Games are on the cards. The quadrennial event will start in August but Shetty was not chosen in the team of five. Instead of the left-hander, it will be young Manav Thakkar who is going to Indonesia. “It’s good that they took a younger player. I am not regretting it and Manav the best of good luck. It is a good opportunity for him to learn,” says Sanil.

After a grand season in 2017 with plenty of medals, Sanil has had a fine run this year as well with the Gold Coast glory. The omission from Asian Games could be a blessing in disguise for him if Sanil makes strides in the pro tours.