Anindith grabs lead in Round 3

Vishnu failed to finish in both the races allowing Mumbai’s Nayan Chatterjee to move ahead by turning in third in Race 1. 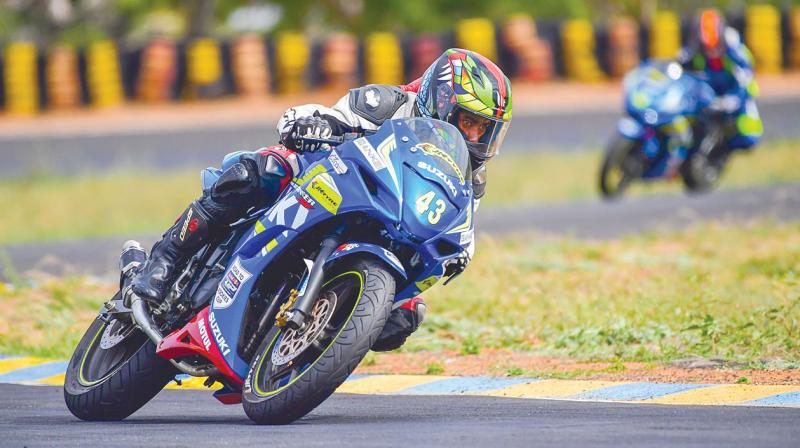 Coimbatore: Mizoram’s 15-year-old biker Lalhruaizela almost assured himself of a ticket to the Road to MotoGP in Spain, by virtue of his second place finish in Round Three of the 20th JK Tyre FMSCI National Racing Championship, in bright and sunny conditions here on Saturday.

The teenager picked up the maximum possible 10 points on the first day of the weekend to take his tally to 48 points, 12 more than state-mate Lalnunsanga.

On the other hand, the Euro JK 17 was thrown wide open as defending champion Anindith Reddy put up an impressive show to climb to top of the table.

Beginning the day a point behind Vishnu Prasad, Hyderabad’s Anindith showcased his class and talent and picked up 15 points even after being slapped with time penalty in both races. He seized the advantage of the reverse grid in Race 2, beginning on Pole 2 to win the race and collect a maximum possible 10 points.

Vishnu failed to finish in both the races allowing Mumbai’s Nayan Chatterjee to move ahead by turning in third in Race 1.

In the Suzuki Gixxer Cup, Chennai’s Joseph Mathew notched up his fifth straight win to continue his strong run. He now has 50 points, miles ahead of the rest.

The LGB Formula 4 proved to be the day’s highlight, with some great overtakings, fierce defending and even the safety car coming out twice. Kolhapur’s Chittesh Mandody of Avalanche Racing regained the upper hand clinching the race in a spectacular manner. Tied with Prasad (MSport) at 42 at the start of the day, Mandody withstood intense pressure to steer clear of the pack.