Mane, a six-time PGTI winner, had two birdies against a bogey and regained his position at the top of the leaderboard with a 1-under 69. 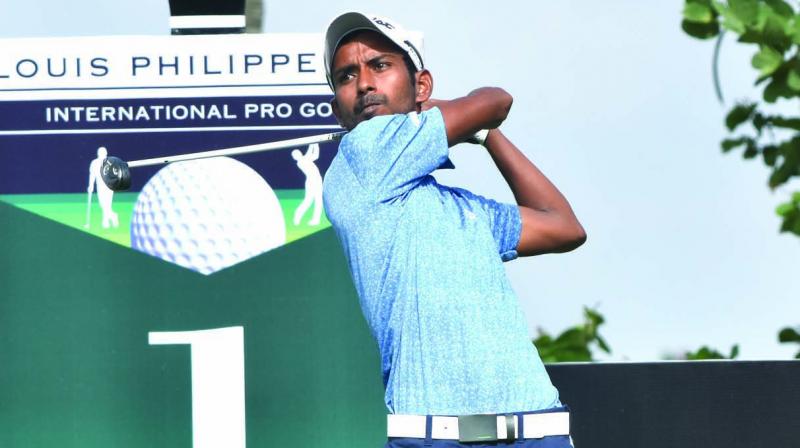 Rashid Khan in action at Bengaluru on Thursday.

Bengaluru: Home boys Udayan Mane and Rashid Khan turned up the heat on the penultimate day of the $75,000 Louis Philippe Cup at the Prestige Golfshire Club here on Thursday, pulling off four clear of the field to set up an interesting final round of play here.

Rashid, who was tied fifth after two rounds, put up a scorching show with a 3-under 67 for an overall total of 9-under 201 to take a share of the lead along with Mane at the Asian Development Tour and PGTI co-sanctioned event. Unlike the first two days that saw a lot of rain, bright sunshine greeted the golfers but the wind-swept conditions meant they had to rely on experience and play with a lot of caution.

Rashid stood out on this count and even after beginning slowly, he reeled off four back-to-back birdies on the back nine to finish his round on a solid note.

Mane, a six-time PGTI winner, had two birdies against a bogey and regained his position at the top of the leaderboard with a 1-under 69. It was Mane’s third sub-par round here.

Overnight leader Miguel Carballo of Argentina too struggled in testing conditions and carded a 4-over 74 (205) and was tied third along with Khalin Joshi. Local hope Joshi, tied fifth a day before, was in his elements on the day. His round of 1-over 71 consisted of three birdies and four bogeys.

“I hit well off the tee but my short game today tested me a lot,” said Mane.

“I had really good putts but most of them lipped out and that for sure frustrated me a lot. Luckily I have had such experiences and that helped me to a large extent. The round today has at least given me an idea about my game tomorrow and I hope to stick to my plan.”

Also finding the going tough was twice Asian Tour winner Rashid. “The round was really good but the conditions were tough. The wind was the most difficult part today because it was tough to control on the greens,” said Rashid.

Om Prakash Chouhan, Rahil Gangjee, Australia’s Marcus, Mukesh Kumar and Sanjeev Kumar were tied fifth on 4-under 206. Gangjee and Both had rounds of 68 (2-under) on Thursday while Mukesh returned an even par card. Asian Tour winner Digvijay Singh was also among the top 10 and in with a chance. He shot 2-under on the day for a total of 207.

Teenager Aadil Bedi registered a 73 (1-over) on the day, his score of 210 putting him nine shots behind the leaders and in tied 17th position.