Haryana’s Suhana Saini lifted the The Sub-Junior Girls crown as she beat Taneesha Kotecha of Maharashtra 4-1, according to the information received. 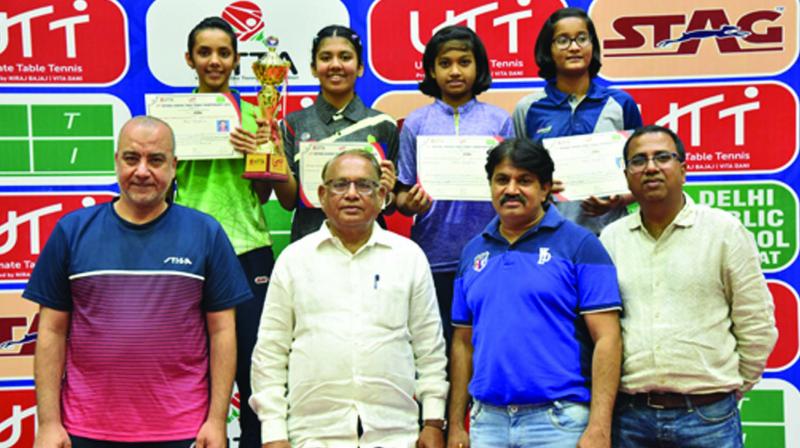 Suhana did not have to sweat it out much against the Maharashtra girl who was rendered passive for most part of the final.

Haryana’s Suhana Saini lifted the The Sub-Junior Girls crown as she beat Taneesha Kotecha of Maharashtra 4-1, according to the information received.

Chetri, who had the measure of left-hander Preyesh, established a quick lead. Going from strength to strength, he capitalised on some unforced errors that the Tamil Nadu boy made. But then there were occasions when Preyesh played really well but Chetri was undoubtedly the better of the two.

Suhana did not have to sweat it out much against the Maharashtra girl who was rendered passive for most part of the final. However, in the opening game which the Haryana girl won after deuce, Taneesha showed glimpses of a good fight brewing. Though there was sporadic attacks from her, they never threatened Suhana’s title aspirations.

Dhruv looked like putting up a fight when he won the fourth game but Umesh, who led 3-0, shut him out in the next game itself to lift the trophy. For Divya, who won her maiden crown, it was a little tough against Nadini as the two paddlers kept winning the alternate games. At 2-2 all, it was anybody’s title but the win in the fifth game gave Diya the edge and she confidently clinched the next game 13-11.

In Sub-Junior Boys semi-finals, Chetri faced some resistance after leading 2-0 but the Delhi boy went on to book final berth against Sarth Mishra of UP. But in the case of Preyesh Raj, it was a touch-and-go until he wrapped it up against Divyansh Srivastava, also of UP, to win 4-2.

The Tamil Nadu left-hander used subtle variations in his serve which fetched him quite a number of points against the UP paddler. Even Divyansh played some brilliant shots on his backhand but whenever Preyesh used the angles rather well they always had the UP boy in a tangle. Yet, he managed to take two games off the left-hander but in the sixth game he squandered his chance after deuce as Preyesh won the game.