The minister said all the necessary steps are being taken to ensure that India displays the 'best-ever' performance at the Tokyo Olympics. 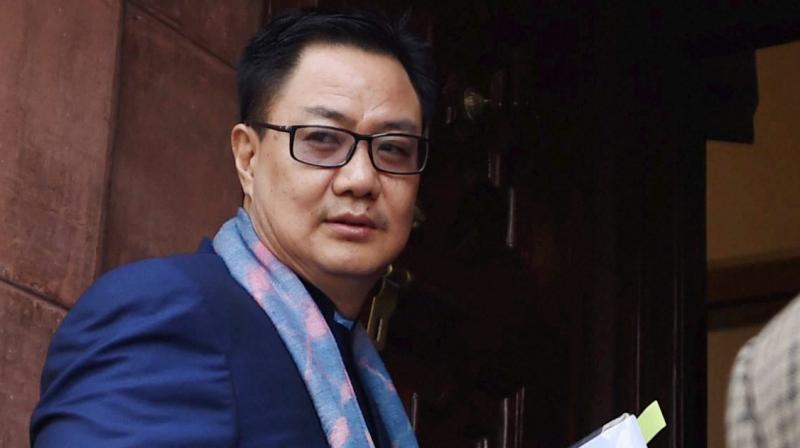 Kiren Rijiju is also elated and impressed over the support given to various sports in the state of Odisha. (Photo: PTI)

Bhubaneswar: Union Minister for Youth Affairs and Sports Kiren Rijiju on Friday said that he is hopeful that India will revive its lost glory in the world of hockey.

India's both men's and women's teams played their Tokyo Olympics qualifiers today at the Kalinga stadium against Russia and the USA respectively.

"I have come to Bhubaneswar to cheer and encourage both men's and women's teams in the Olympic qualifier match. Hopefully, India will revive its lost glory in hockey," Rijiju told the reporters before the matches.

"I am extremely hopeful that this time both men and women will qualify for the Tokyo Olympic," added Rijiju, who visited the city to watch the qualifiers.

"As the Minister for Youth Affairs and Sports, it is my responsibility to ensure that our boys and girls are being encouraged appropriately and are provided with support wherever necessary. So, I have come personally to cheer our teams," he said.

Rijiju is also elated and impressed over the support given to various sports in the state of Odisha.

"Secondly, I am very impressed with the way in which the Odisha government is supporting sports. Odisha government, for the last so many years, has taken tremendous initiatives to encourage various sports disciplines. So, these kinds of important international matches are awarded on the basis of the support extended by the local government," Rijiju said.

"...I also extend my hearty congratulations to the people of Odisha for showing tremendous enthusiasm in sports," he added.

The minister said all the necessary steps are being taken to ensure that India displays the 'best-ever' performance at the Tokyo Olympics.

"Government of India, the Department of Sports along with the Indian Olympic Association in collaboration with all the sports federation are taking all necessary steps to ensure that Tokyo 2020 Olympics will be the best ever performance by India. Winning or losing that I cannot say, but we will give the best-ever shot in terms of our preparation and performance," he said.