Gaganjeet Bhullar in action during the Panasonic Open Pro-Am at the Delhi Golf Club on Wednesday. 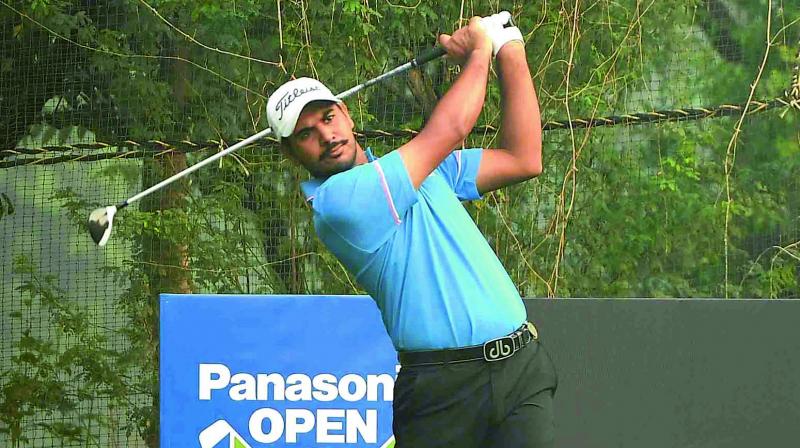 The DGC course — despite internal talk of a revamp and redesign — bears a resplendent, verdant look and with as many as four Indian winners on the Asian Tour this year in the field, low numbers are being forecast for the leaderboard.

New Delhi: With five Indians making winning breakthroughs in six previous editions of the $400,000 Panasonic Open, the big buzz around the venerable Delhi Golf Club is whether the trend will continue.

If it launched Anirban Lahiri in the inaugural edition in 2011, it bookended a domestic career with over 100 wins in India for 51-year-old Mukesh Kumar last year. In between, Digvijay Singh, Shiv Shankar Prasad Chawrasia and Chiragh Kumar have all held up the splendid silver trophy and with a growing pack of ambitious young Indians pushing for glory, it promises to be a most open tournament this year.

The DGC course — despite internal talk of a revamp and redesign — bears a resplendent, verdant look and with as many as four Indian winners on the Asian Tour this year in the field, low numbers are being forecast for the leaderboard.

Only Lahiri and Jeev Milkha Singh are missing this year, the former lined up for a PGA Tour event in Las Vegas and Jeev, who had to pull out at the last minute because of a freak elbow injury. “I was really looking forward to this week, but I need to rest and allow the elbow to heel,” he said on the day.

Attention quite naturally will be on Shiv Kapur, who won the Yeangder Heritage, Ajeetesh Sand-hu, winner at the Yeangder TPC and Gaganjeet Bhu-llar who topped the Macao Open. Pushing for a place in the sun are the likes of Shubhankar Sharma, Honey Baisoya, Khalin Joshi and Udayan Mane, who have all been knocking on the door for some time, while two-time Asian Tour winners Rashid Khan will be keen to break a three-year title jinx.

Also, the presence of Arjun Atwal, newly-appointed captain of Team Asia team for the EurAsia Cup, will be an added incentive for the field. Atwal, who won the Hero Masters back in 2003 at the DGC, said here, “This week, as also the other starts this year, will see me not only focus on my own game, but also keep a watch out for other Asian Tour boys as we get ready for the EurAsia Cup in Malaysia next January.

“I am looking forward to the responsibility. It should be fun and yet challenging. Asia now has solid talent and I would love to be with them. I have always had great fun in Malaysia. I won twice there in 2003 and 2008, so I have great memories of Malaysia and it should be interesting to go back in a new role.”

The international challenge will be with 18-time Asian Tour winner Thaworn Wiratchant, Malaysia’s Nicholas Fung and Rattanon Wannas-richan of Thailand. Also in the field are a large representation from the United States who are all also seeking breakthrough performances in Asia.