My eyes set on gold at Tokyo Games: PV Sindhu

A sudden downpour did not deter the sports lovers present at the venue from staying on till the end of the event. 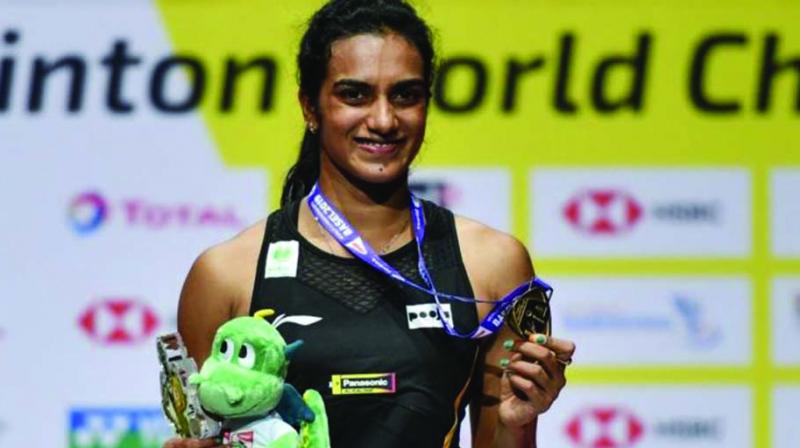 Mysuru: Badminton ace, P.V. Sindhu was the cynosure of all eyes as she launched the Dasara Sports Chief Minister Cup 2019 at the Chamundivihar stadium in the city on Tuesday and at the Yuva Dasara later in the evening  where she was honoured.

Speaking at Dasara Sports, she said hard work was the key to success and emphasised that the support of parents for their children’s interest in sport was equally important .

Chief Minister, B.S. Yeddyurappa, who was present on the occasion, called her an inspiration and role model and wished her the best for the Olympics. A sudden downpour did not deter the sports lovers present at the venue from staying on till the end of the event.

Earlier, speaking to reporters, the badminton icon admitted in response to a question on her  preparations for the Tokyo Olympics next year that it was not going to be easy.

“I need to work much  harder and do my best. Even before the Olympics, each tournament will be equally important.”

Asked when she planned to play “doubles off-court”  ( get married), she replied, “Not really any time now. I am just focusing on the Olympics and my aim is to get gold in Tokyo.”

On the women coach, who  withdrew, she explained she had to leave as her husband wasn’t keeping well. “But I have to keep working hard whether the coach is there or not.  You have to believe in yourself  and you will achieve anything you want,” she added.

Asked how Indian badminton was doing, she said, “Indian badminton is doing really well. In the last couple of years there have been a few juniors who are coming up and you will see many more medals coming through in future.”

Asked if “Khelo India” would help children in rural areas and small towns, she said the government was being very supportive by such initiatives. “In rural areas, parents’ support is  most important. And  at the grassroots, every school should have a playground for some sort of sport,” she suggested.