The game was going evenly before U.P. Yoddha star, raider Rishank Devadiga, showed his experience to help turn the tide in his team’s favour. 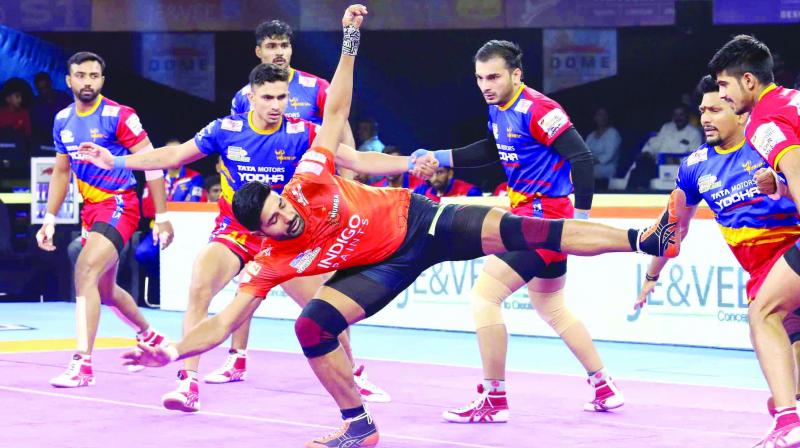 Action between U Mumba and U.P. Yoddha from their match at the Dome, NSCI, SVP Stadium on Wednesday.

U.P. Yoddha had ended U Mumba’s promising Pro Kabaddi League season six campaign by upsetting them in the Eliminator 1 through some strong defensive performances last year. On Wednesday night, they repeated that performance to beat hosts U Mumbai 27-23 in the season 7 game at the Dome, NSCI, SVP Stadium. Defender Sumit registered a High 5 for U.P. Yoddha, while Monu Goyat was their best raider with six raid points.

For the second straight game, U Mumba lost a close game at home. They have now three losses in five games and meet Gujarat Fortune Giants in their last home leg game on Friday.

The game was going evenly before U.P. Yoddha star raider Rishank Devadiga showed his experience to help turn the tide in his team’s favour. With less than two minutes to go, he made a crucial raid and made U Mumba skipper Fazel Atrachali commit a mistake which made a huge difference in the end.

“If I had gone and attempted to get a point in that raid and ended up coming back empty handed then our defence would have six players and U Mumba would have a chance of getting a bonus. That’s why I wasted the first 25 seconds and decided to try in the last five seconds of the raid. It worked in our favour that Fazel (stepped off court and) got out, resulting in a point for us,” Devadiga said in the post match press conference.

Devadiga who is from Mumbai and led Maharashtra to national title last year, was playing his first game of his season after coming back from an injury. The experienced player made instant impact in his home city and played part in his franchise’s first win of the season.

“I had a bit of a muscle problem just before the season began. It was pretty disappointing for me because at the start of the season we thought we were set. Looking at the Mumbai leg, I was determined to get fit and help my team,” he said.

The 27-year-old Santacruz born player said it is always special to play in Mumbai and he was  confident to do well. “Playing in Mumbai is always special and for me it’s a dream. I’ve been playing for three seasons with U.P. Yoddha now, but I still have a soft corner for Mumbai because I started in this league with U Mumba. There’s a different atmosphere here and I was confident of doing well here,” he said.

U Mumba coach Sanjeev Kumar Baliyan rued their defenders haven’t performed as a unit yet. “Our raiders are doing their job. But yes, our entire defence hasn’t performed as cohesively as they should have,” he said.