Divyanshu Bajaj, who had rounds of 5-under and 2-under on the first two days, was tied fourth. 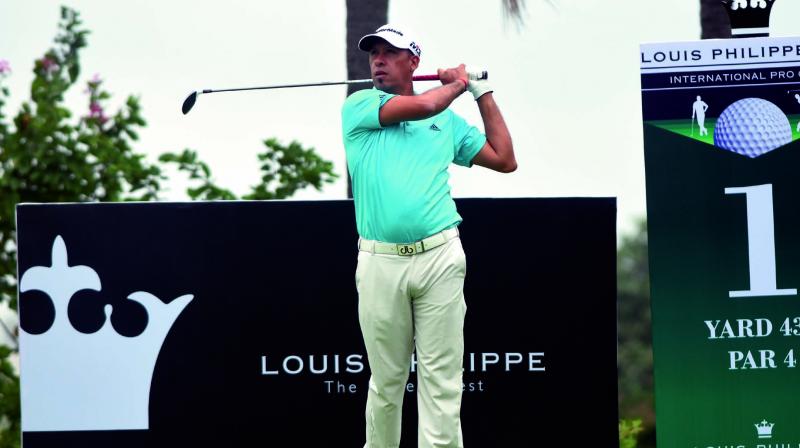 Argentina’s Miguel Carballo in action on day two of the Louis Philippe Cup in Bengaluru on Wednesday.

Bengaluru: Incessant rains and strong winds at the Prestige Golfshire Club here called for a gutsy display and sound technique and Argentina’s Miguel Carballo emerged on top, taking the sole lead at the half way stage of the inaugural Louis Philippe Cup here on Wednesday.

Tied overnight along with home boy Udayan Mane, Carballo pulled off from the rest of the field with a solid 2-under 68 for an overall total of nine-under 131 after 36 holes.

Hot on his heels were Mane and Om Prakash Chouhan, who were tied for the second place.

A total of 51 golfers made the cut — which fell at 2-over par — at the Asian Development Tour and Professional Golf Tour of India co-sanctioned event.

Mane, who was in top form on day one shooting a course record of 63 along with Carballo that beat Rashid Khan’s 67 set in 2012, carded 1-under 69 on the day under testing conditions. PGTI regular Chouhan produced yet another solid round, carding 3-under 67 to go with his 5-under on day one. He was tied with Mane at 8-under overall. Carballo called it a “taxing day”.

“It was a tough day for me because of the windy weather along with the heavy downfall. It stopped once before resuming once again, which resulted in four bogies for me,” said Carballo, a former PGA Tour player and two-time winner on the Web.com tour.

The conditions were trying for all as rain and wind meant the fairways and greens got slower, forcing the players to constantly adjust their rhythm.

Divyanshu Bajaj, who had rounds of 5-under and 2-under on the first two days, was tied fourth.

The day’s best score — six-under — came from experienced campaigner Rashid Khan, also a two-time winner on the Asian Tour. Rashid was tied fifth  along with Khalin Joshi with a total of 134 over two days. Two other seasoned Asian Tour pros, Rahil Gangjee and Marcus Both of Australia, also made the cut with steady rounds and were within striking distance. Gangjee  shot 69 to lie at tied 14th on 2-under. Both was in the same position with a round of even par 70.