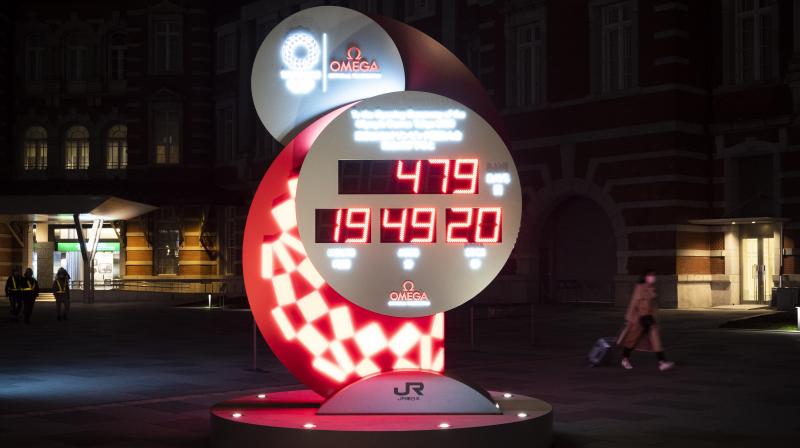 THE WAIT GETS LONGER: A countdown clock displays the remaining days until the new start date for the Tokyo 2020 Olympics. AP Photo

Lausanne: The postponement of the Tokyo Olympics and the shutdown of the sporting calendar because of the coronavirus pandemic are going to hit international sports federations hard financially.

Many sports that are part of the Games depend heavily on the payouts every four years from the International Olympic Committee (IOC).

"The situation is tense and very gloomy. An assessment will be made, but clearly some posts are under threat," said an official of a major international federation.

The 28 international federations (IF) of the sports that were due to be present at the Tokyo Olympics, would have received substantial sums from the IOC.

However, the postponement of the Games until 2021 could lead to a freeze of their payment.

"We have a lot of IF with substantial reserves, but others work on a different business model, they have income from major events which are suspended, which can be a problem for the cashflow if they don't have enough reserves," said Andrew Ryan, director general of the Association of International Olympic Summer Sports Federations (ASOIF), which is responsible for distributing this money.

The five additions to the Tokyo Games programme - karate, surfing, skateboarding, climbing and baseball/softball - are not eligible.

The Olympic payout totalled $520 million after the Rio Games, four years ago.

"The Olympic money could be less than for Rio 2016," Ryan warned before adding: "My advice is to budget the same as in Rio".

The federations receive money on a sliding scale determined by their audience and size. The three largest (athletics, swimming and gymnastics) can expect approximately $40 million.

For the second tier, made up of cycling, basketball, volleyball, football and tennis, the sum is $25 million.

For group three, which contains eight sports, including boxing, rowing, judo and table tennis, it is $17 million.

The nine sports in the next level (including sailing, canoeing and fencing) receive $12 million.

For the three in the last category (rugby, golf, modern pentathlon) the payout is $7 million.

For the largest associations, such as football's FIFA which has a $1.5 billion nest egg, or basketball body FIBA which has CHF 44.4 million (42 million euros) in reserves, IOC aid represents a small proportion of their income.

For others, it is vital. "Some IF probably don't have the cash flow to survive one year," said Ryan.

For most federations, the postponement of the Olympic Games has a domino effect, forcing them to reschedule their own money-earning competitions.

"The revenues from these events will eventually come in," said Ryan. "But this impacts the cash flow."