Nagaraj said they struggled a little, but promised a better fight on the later stage. 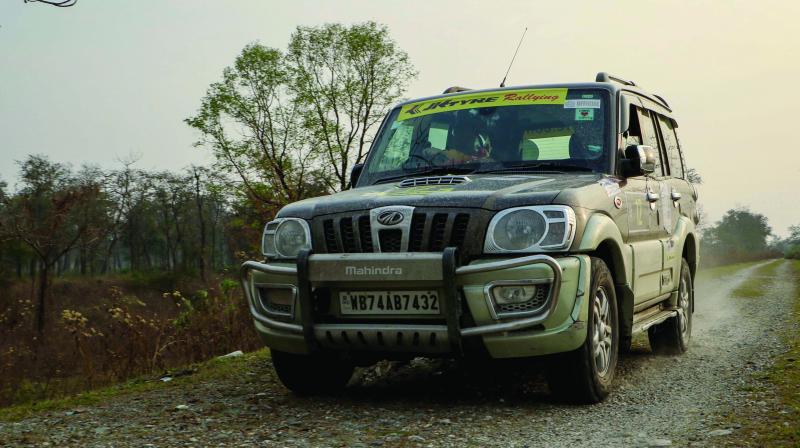 Paro (Bhutan): Two-time champion Ajgar Ali used his experience to master the tough second stage and kept the lead with minimum penalty points at the Himalayan Drive 7 on Thursday night.

The second stage from Murti in West Bengal to Paro Valley in Bhutan was accentuated with sharp turns and rocky riverbed stretch but Ajgar along with co-driver Mohammad Mustafa kept their calm and used their skills to complete the challenge. The rallyists went through tea gardens to Teesta riverbed on the India-Bhutan border before reaching Paro Valley on the lap of  Himalaya.

“The river was bit deep but I used my experience to overcome the situation. The riverbed was a long stretch and it was very rocky as well. If you don’t have any expertise then don’t be surprised if your cars gets damaged,” TSD champion Ajgar said after the second stage.

Yogendra Jaiswal and his co-driver Nagarajan Thangaraj, who started their day in the second position, managed to hold on to that position, even narrowing down the lead and threatening leaders.

Nagaraj said they struggled a little, but promised a better fight on the later stage.

Gagan Sethi and co-driver Rajkumar Mundra, who slipped to seventh after the initial stages, bounced back to grab the third spot. The JK Tyre Hornbill TSD Driver champion Gagan had some technical glitch in the first stage but the duo successfully overcome it to get back into the championship mix.

“I am happy we are among top three. I will try to maintain and improve our penalty points to go further,” Delhi driver Gagan said.

While there were lot of unfortunate incidents as two driver duo -- Pratick Sirkar and co-driver Debashish Ghosh and Ratan Pal and  co-driver Prasenjit Roy -- failed to finish their stage with technical issues and were out of the event.

With leg three of India's only multi-nation TSD (Time, Speed, Distance) from Paro (Bhutan) to Phuentsholing being cancelled due to heavy snowfall, the drivers will head straight to Leg 4 which will be flag-offed from Jaigaon while the final leg  will see the competitors traverse from Kalimpong to Siliguri.